Lagdera MP calls on state to deal with bandits

This comes after one person was killed by bandits on the border between Banane and Garbatula. 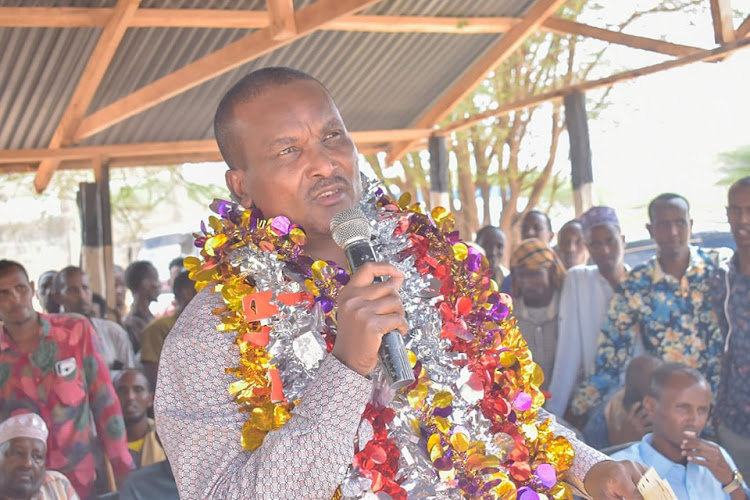 Lagdera MP Mohamed Abdikadir Hussein has urged the government to move with speed and arrest bandits who killed one person on the border between Banane and Garbatula.

During the incident, armed militants struck Banane and left with 70 camels.

The owners of the camels and villagers then embarked on a mission to recover the stolen animals something that led to a gunfight.

In the ensuing gunfight, one person was shot dead and 10 camels were killed.

The bandits are said to have crossed over to the Isiolo border with the animals which have since been recovered.

The MP questioned why the suspects were yet to be apprehended.

Speaking to the Star on phone, Garissa county commissioner Boaz Cherutich said that the security apparatus from Isiolo and Garissa were working closely to pursue those behind the incident.

While addressing residents on December 19, Interior CS Kithure Kindiki said the government would do everything possible to ensure that security is restored in the border areas.

Among the measures announced included the recruitment of more National Police Reservists, the creation of a police station at Korbesa and the establishment of an anti–stock theft, rapid deployment, and General Service Unit camps in the areas to deal with the cattle rustlers.

“I want to urge the CS interior to give the matter the seriousness it deserves by deploying enough security officers in all the troubled areas to flash out these bandits,” the MP said.

The MP called for calm from the residents and urged them not to retaliate saying that he will continue engaging the government to find a lasting solution.

He challenged farmers to diversify their farming activities.
News
3 weeks ago

The attackers made away with an unknown number of camels and goats.
News
3 weeks ago