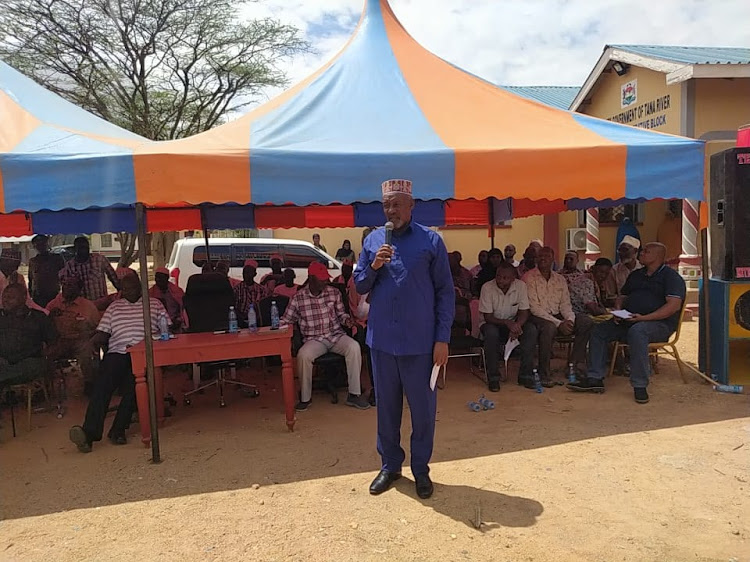 Residents of Madogo in Bangale subcounty, Tana River, have asked the county government to come up with a proper town plan to guide developers and other business people.

The residents said on Wednesday lack of planning leads to land grabbing, improper construction of houses that host more tenants than permitted and lack of access roads to schools and other social amenities.

Led by elders of communities living in the area, the residents said cases of land grabbing, or brokers selling the same piece of land to different people, have been on the rise and something needs to be done to stop it.

A woman sells her merchandise in Madogo town on Wednesday
Image: STEPHEN ASTARIKO

Over the past few years, there have been numerous conflicts on land, especially due to the fact that most people owning land in Tana River do not have title deeds or other legal proofs of ownership.

“Land brokers are denying us peace in this area. Most of the insecurity cases here are a result of land issues and we want the county government to establish a land ownership policy so that we can be able to easily identify the real land owners,” said Osman Ngutu, a council elder of the Orma community.

“Most of the people claiming to own land here are abroad and want to evict us from our lands. We need to have a policy on buying and selling of land so that we can prevent some of the cases we are facing today,” said another elder.

Responding to the residents, Tana River deputy governor Mahat Loka said that a team from the county government had already been established to look into the land issues.

Loka further said that a community council of elders has also been formed to deal with land disputes and prevent any conflict that may arise.

“Most people in Tana River do not have title deeds. We have a team of officials from the county government who are working to make sure that people start getting their title deeds,” Loka said.

“There are people who are claiming to own lands which don’t belong to them and that is the main problem in Madogo. We have people claiming that they have lived in a certain area for many years but if you look at them, they just want to sell the land,” he added.

The deputy governor, who also hails from Madogo, told the residents that the process of issuing title deeds will be gradual and asked them to be patient.

Bangale deputy county commissioner Joseph Kipkorir on his part noted that the land conflicts in the area may be because the residents are only realizing the value of their lands now.

“We will work with the elders and the county government to make sure that we bring to end any land related conflicts,” Kipkorir said.