•The Governor also noted that employment opportunities that will emerge from the projects must prioritize residents.

•The Isiolo-Mandera road is expected to spur economic growth in the Arid and Semi-Arid Lands (ASALS) Counties of Isiolo, Wajir and Mandera. 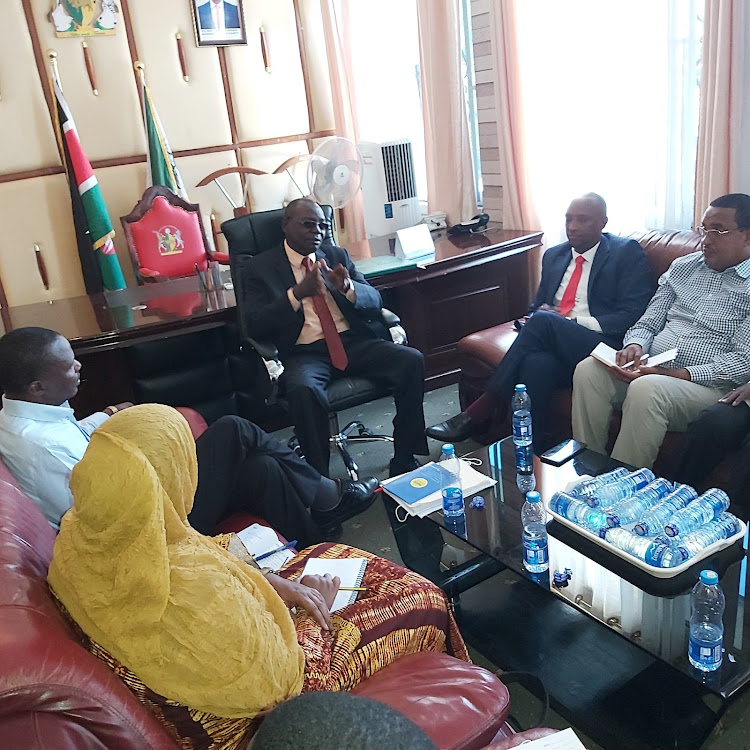 Isiolo Governor Abdi Hassan Guyo and his Deputy Governor Dr. James Lowasa in a consultative meeting with officers from world Bank and Kenha on September 20, 2022

Isiolo County is set to have a good road network as World Bank announces that it will finance road projects.

Starting off will be the construction of the 365 kilometres of road from Isiolo-Kulamawe to Modogashe and Wajir.

This was revealed on Tuesday when officers from the Ministry of Transport and KeNHA visited  Governor Abdi  Hassan Guyo in Isiolo.

The ministry also brought up the Governor to speed on the socio-economic infrastructure (Sub-projects) along the road.

Among key sub-projects include; Dispensaries, Milk Coolers, Schools and Boreholes that were all identified by local communities through public participation

However, Governor Guyo advised officers from  KeNHA and the Ministry of Transport not to commence on construction without engaging his office on the socio-economic benefits that the people of Isiolo County stand to gain.

He emphasized that he is accountable to the residents of Isiolo County and that his main interest in the project is their needs.

"As the people's representative, don't commence on construction without consulting me on how the road will benefit our people. My interest is the socio-economic benefit the road will bring to residents of Isiolo County," Guyo added.

The Governor also noted that employment opportunities that will emerge from the projects must prioritize residents.

The Isiolo-Mandera road is expected to spur economic growth in the Arid and Semi-Arid Lands (ASALS) Counties of Isiolo, Wajir and Mandera.

KeNHA will oversee the construction and completion of the 748 km project deemed a major game changer in the North Eastern Region.

The whole project will be implemented in four packages with the first being the Isiolo–Kulamawe–Modogashe.

This will involve groundbreaking for the construction of the first two segments of the road (Isiolo-Kula Mawe-Kula Mawe- Madogashe), a distance of about 200kms.

Then the second package will be the Modogashe – Samatar – Wajir road project.

The third phase will be the Wajir – Tarbaj – Kutulo – Elwak.

Almost half of the country is already facing food insecurity and this might worsen.
Opinion
5 days ago
Post a comment
WATCH: The latest videos from the Star
by MAUREEN KINYANJUI News Reporter
North Eastern
20 September 2022 - 15:10
Read The E-Paper