Drought continues to have a devastating effect in the Northeastern region as pastoralists continue to lose their animals en mass staring at living life as destitute.

Hassan Sugal a resident of Abakaile ward in Dadaab subcounty looks at a circus of one of his cows. He has lost lost 120 animals in the last three months.
Image: STEPHEN ASTARIKO

Drought continues to have devastating effects in Northeastern region as pastoralists continue to lose their animals in large numbers.

To make it worse, Kenya Red Cross society says 378,000 people are staring at starvation as the number continues to increase by the day.

The drought has taken a heavy toll on the counties due to the prevailing situation of depressed rains or lack of rainfall in the past four consecutive rainy seasons.

A spot check in most parts of Garissa on Saturday revealed a dire situation of extreme water scarcity, carcasses strewed everywhere and  worsening rates of malnutrition.

Desperate  pastoralists who spoke to the press called on the National and County governments, development partners, the NDMA and other relevant agencies to intervene and alleviate their suffering.

Hassan Sugal a resident of Abakaile ward in Dadaab subcounty said he lost 120 animals in the last one year through drought.

Abdi Barre a resident of Abakeile feeds his two calves with boxes. They are the only ones that survived the drought after he lost 180 animals
Image: STEPHEN ASTARIKO

“In April  this year, my son left with my 120 animals that comprised of cows, sheep and goats to Kimsayo in search of pasture and water as I was left behind with the family. But after three months he came back empty handed. All animals had died,” he said.

He added, “I was lost for words and almost ran mad. At first I could not believe him and had to call people there who confirmed the sad news. As we speak, I'm left wondering what the future holds for me and my family, how will I fend for my family? I am appealing for help.”

Abdi Barre a resident of Abakeile who lost 180 animals wondered how he will go about providing for his family considering livestock is his only source of livelihood.

“You can imagine losing all your livestock in a few months through drought and left with absolutely nothing. I am so stressed and really don’t know what do. As we speak, one of my sons is supposed to be joining university in September and I don’t know where I will get the school fees,” he said. 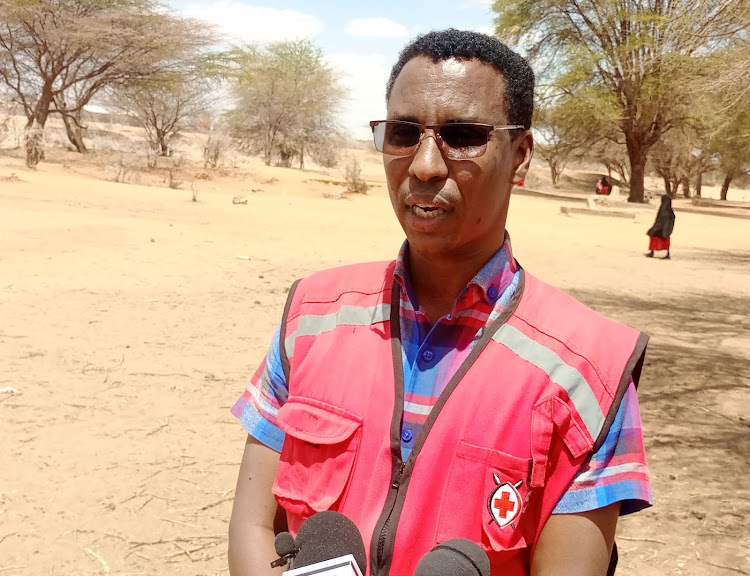 The Kenya Red Cross has engaged in an integrated drought management programme which offers cash transfers and animal offtake.

The offtake programme is a government initiative through the KMC that is implemented by the Kenya Red Cross, the objective being to buy weak animals  from the community then slaughter and distribute the same to the residents.

Speaking in eldere town, Lagdera subcounty where he had gone to oversee the exercise, Garissa county Kenya Red Cross coordinator Mohamed Dubow said if it does not rain in October, November and December then the number of those affected will rise to 420,000 which translates to half the population of the county.

“We are the crisis face of the drought and even though there are many interventions that are currently being done by both the national and county government and other agencies, there is need to upscale the same since the number of those in need of help keeps on increasing by the day,” he said. 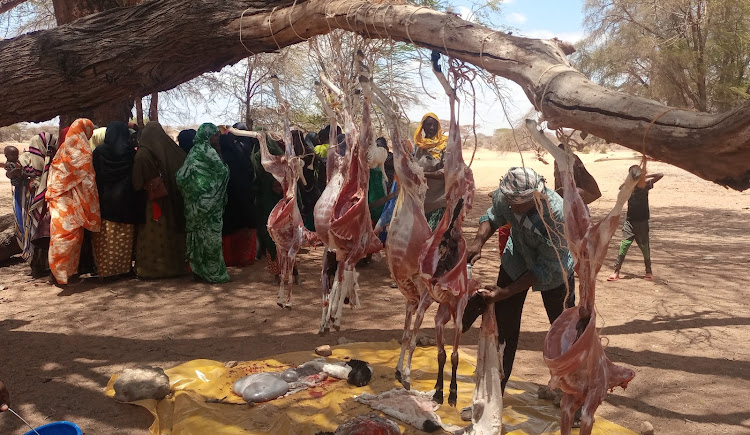 According to the meteorological department, the weather outlook projects depressed rainfall across all ASAL counties during the October-December 2022 rainfall season due to La Nina. This presents the prospect of a 5th failed rain season.

Speaking on the sidelines of the ongoing induction summit in Mombasa, governors from the affected counties called for immediate efforts to protect the people and their livelihoods from the biting famine.

They said the most affected sectors are water, livestock, health, and nutrition, agriculture and education.

Isiolo to partner with USAID to reduce drought effects

More than 29,000 household are at risk and in dire need of intervention
News
1 week ago