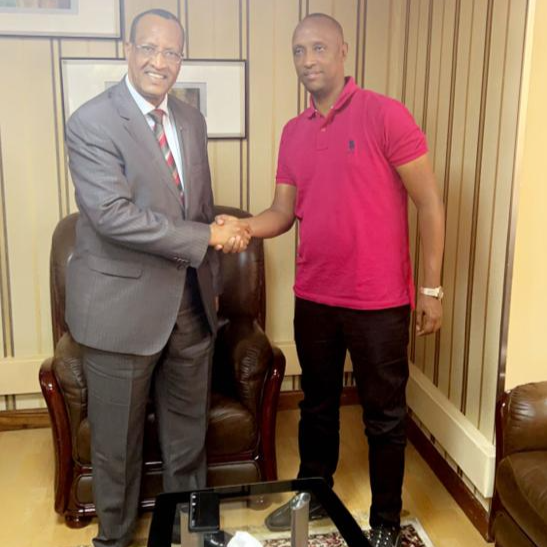 Isiolo and Garissa counties have began talks aimed at addressing insecurity issues along their border.

On Monday, Isiolo Governor Abdi Hassan Guyo and his Garissa counterpart Nathif Jama held discussions on how peace can be restored along the border.

“We discussed how to tackle the emerging issues and restore peace to enhance peaceful co-existence among the neighbouring communities,” Guyo told the Star.

The decades-long security challenge along the two counties stem from resource-based conflicts and border disputes.

The conflicts have led to loss of lives and livelihoods, displaced families and destruction of property.

It has however continued to escalate with residents calling out the leadership for failure to address it.

Politicians from both sides have been accused of fanning the conflicts, with the government being accused of taking too long to solve the boundary row.

Leaders from both counties had called on the national government to arbitrate the boundary dispute to avert further bloody clashes.

Some of the resolutions by the inter-county peace committee included ceasefire among the communities, leaders to hold an urgent meeting in Nairobi, and follow-up meetings for healing and reconciliation at Merti and Hadado subcounties.

Also, the surrendering of illegal firearms by the warring factions, chiefs to initiate reconciliation meetings and adherence to resolutions.

“My government will work on water scarcity that you have been experiencing by coming up with ways like water trucking.

"This is the quickest short-term solution as we work on long-term solutions like building and rehabilitating water points,” he said.

In May, the government ordered an immediate ban on unlicenced mining activities in  Kom, Merti subcounty.

This followed the declaration of a security operation to flush out criminals hiding in the mines.

This was in tandem with the launch of Operation Rejesha Amani Marsabit.

The operation was launched following incessant inter-ethnic attacks that defied peace initiatives and the lapse of the 30-day window sought by county leaders to secure reconciliation.

Security forces had also earlier intercepted a huge cache of explosives in Merti.

The explosives were meant for Nairobi and were being moved by a terrorist cell.

The operation is by security teams drawn from the GSU, Rapid Deployment Unit, Quick Response Unit and Anti-Stock Unit.

Some leaders from Isiolo had then protested against the plan to close down the local mining site in one of the areas declared by police as a disturbed zone.

Instead, they asked the security agencies to focus on flushing out bandits raiding various parts of the county, killing people and stealing herds of cattle.

They argued it was their considered view that declaration of Kom sublocation as a disturbed area will not provide a lasting solution to the insecurity problems in Kom.

The leaders said Durte mining is not illegal but an informal site, with more than 3,000 residents depending on it.

They also proposed that the government sets up a special and permanent GSU camp in Kom, as a long-term deterrence against raiders from neighbouring counties.

Say the disarmament exercise has left them vulnerable to attacks by gunmen.
Counties
2 months ago

Some five others were injured in the clash between an armed gang and miners.
Counties
3 months ago

The herders who were shot in the stomach are in stable condition.
Counties
3 months ago

A security operation is ongoing in the area to flush out criminals hiding in the mines.
News
6 months ago
Post a comment
WATCH: The latest videos from the Star
by MAUREEN KINYANJUI News Reporter
North Eastern
13 September 2022 - 22:00
Read The E-Paper