• Residents said most herders are not armed after the security exercise dubbed “Operation Rejesha Amani Marsabit” led to the surrender of their weapons.

• “We are exposed to attacks by these gunmen because they know we are not armed,” a herder said adding that he was considering arming himself. 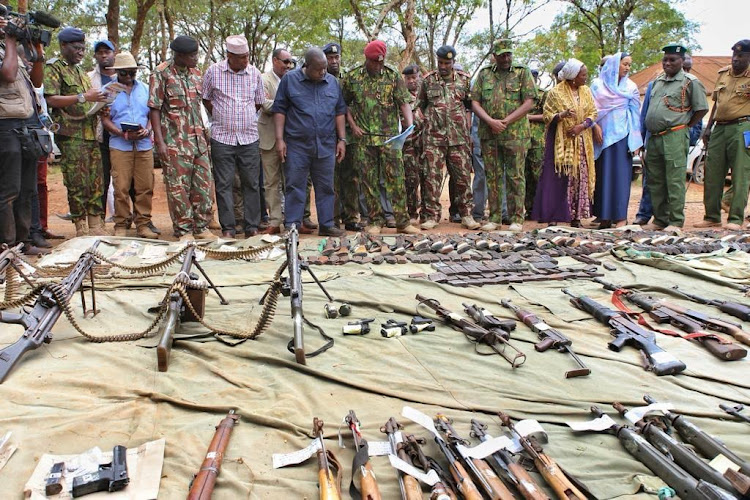 A herder was shot and seriously wounded in a cattle rustling incident in Merti, Isiolo.

Police said they engaged the gunmen and injured one of them in the hip before they drove off with about 400 animals towards Samburu.

This prompted a beehive of activities with police being mobilised to pursue them.

After a four-hour pursuit, 398 of the stolen animals were recovered and returned to the owners.

Isiolo police boss Hassan Barua said the recovery was made possible through combined efforts from residents and police.

He warned against persistent attacks by rustlers saying the practice was backward and always leads to deaths and poverty.

Residents said there have been increased attacks by gunmen who raid villages for animals, leaving some of them with injuries and without a source of income.

“We are exposed to attacks by these gunmen because they know we are not armed,” a herder said adding that he was considering arming himself.

In some incidents, some herders have been killed in the process.

Police said they had mobilised more personnel to act as a buffer zone between the two communities, amid fears of retaliatory attacks.

Isolo Governor Abdi Guyo said he would priorities efforts to find a solution for the area.

“We are on the issue and I am looking forward to holding meetings to find a lasting solution,” he said.

A security operation in Marsabit county has pushed the rustlers towards Isiolo, which is now more vulnerable.

Residents said most herders are not armed after the security exercise dubbed “Operation Rejesha Amani Marsabit” led to the surrender of weapons, used to protect their animals.

The operation aimed at curbing incessant inter-ethnic attacks that have defied peace initiatives.

The animosity between the Borana and Gabra communities has progressively boiled over.

Officials said rival groups have been armed and transformed into competitive political militias meting out violence on innocent civilians.

This they say has become one the costliest security challenge in the country.

All 400 animals stolen in Isiolo over weekend recovered

The herders who were shot in the stomach are in stable condition.
Counties
4 months ago