Keynan supporters had already taken to the streets to celebrate.

•Before the voting counting exercise was suspended on Sunday, provisional results had shown incumbent Keynan ahead with  7,517 votes compared to Boray’s 6,838 votes.

•However, Keynan and Boray have both claimed victory. 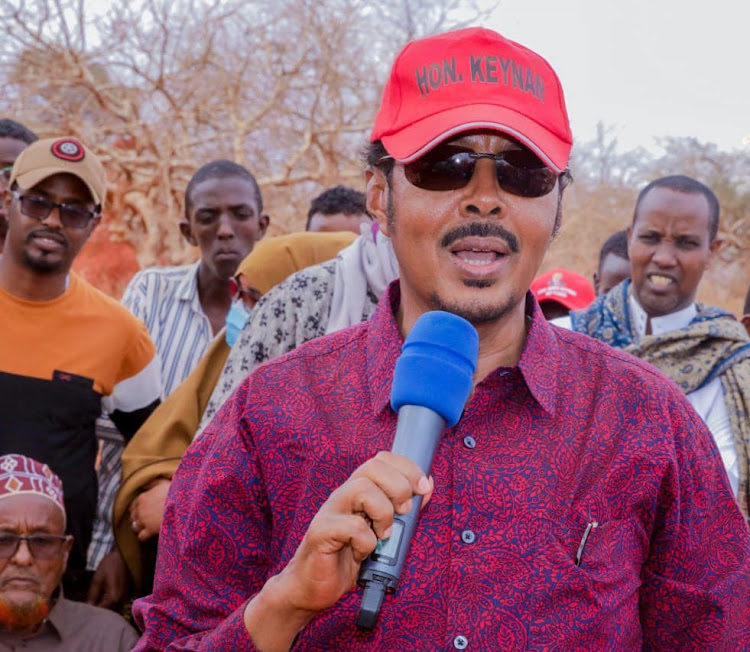 Eldas MP Adan Keynan is on the verge of retaining his seat even as residents await the release of official results.

Before the voting counting exercise was suspended on Sunday, provisional results had shown incumbent Keynan ahead with  7,517 votes compared to Boray’s 6,838 votes.

IEBC is yet to announce the winner as vote-counting was yet to be concluded.

However, Keynan and Boray have both claimed victory.

In the afternoon, there was confusion as both candidates declared themselves winners in the just concluded elections.

Keynan who is the Jubilee Party’s parliamentary group secretary and Azimio la Umoja One Kenya Coalition point man in northern Kenya took to his Facebook page to claim victory.

“Alhamdullilah! Thank you so much my good people of Eldas Constituency. I dedicate this victory to you for your most resounding and decisive support. It is now over. Let us all unite and make Eldas great,” read part of the post.

Keynan supporters had already taken to the streets to celebrate victory after learning of provisional results.

Earlier on, there were reports indicating that Boray was leading in the number of votes before Keynan took the lead.

"I Thank you the great people of Eldas Constituency for putting your trust in me. I promise not to let you down,” read in part of Boray’s post.

The voting counting exercise has since been indefinitely suspended and the issues referred to the commission in Nairobi for hearing and determination in the next few days.

The Eldas elections were dogged by chaos after  Keynan and Boray’s supporters clashed on the final day of the campaigns as they accused each other of using the presiding officers and deputy presiding officers to steal the election.

This forced the IEBC to dispatch a team in the area led by commissioner Abdi Yakub Guliye to sort out the issue as well as oversee the election.

Coming voting day violence was still witnessed in some parts despite a solution being arrived at the previous day.

Counting of votes and tallying was also affected by the chaos that left some people injured leading to delays in the declaration of the results.

If Keynan wins, he will become the only MP from northern Kenya to be re-elected for a fifth term.

This will make him the longest-serving legislator in the next Parliament.

Incumbent Keynan of Jubilee is engaged in a fierce battle with Ahmed Boray of ODM.
Counties
1 month ago