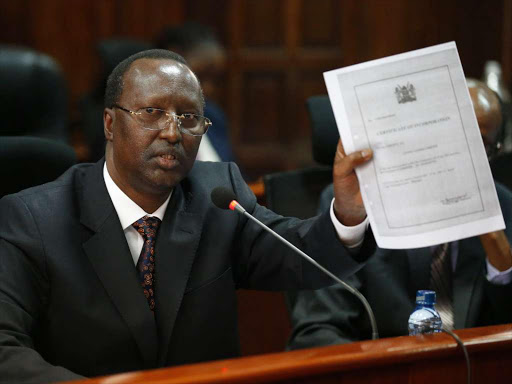 Isiolo Governor Mohamed Kuti when he appeared before the Senate health committee on November 22, 2018.
Image: FILE

Gathungu said at least Sh500 million expenditures are unaccounted for.

In the report that could put Governor Mohamed Kuti’s administration on the spot, Gathungu revealed how the county failed to explain several expenditures and bent financial and procurement laws.

Kuti will be leaving office after next week’s election having served for five years. He declared he will not defend his seat due to health reasons.

According to the report, the county spent Sh24.66 million on two law firms which it procured through the request for quotation instead of open tender.

This was contrary to the Public Procurement and Asset Disposal Act Regulations, 2020 which put the threshold of Sh2 million for a request for quotation.

“In the circumstances, the validity and value for money for the Sh24.66 million expenditure for the year ended June 30, 2021, could not be confirmed,” the report reads in part.

Gathungu also revealed irregularities in the procurement of Sh57.8 million for a comprehensive medical insurance cover and group life cover with the NHIF.

The report shows that the county partially paid for the cover on December 14, 2020, with the balance of Sh27.22 million to be paid later.

However, there was no evidence the balance was cleared, a scenario which could lead to cancellation or interruption of the cover by the provider thus impacting negatively on the beneficiary staff.

The list of staff covered under the comprehensive medical insurance and group life was not provided for audit review.

Gathungu also faulted the county for carrying out procurement in an opaque environment by constantly failing to prepare, publish and publicise all contracts as required under the Public Procurement and Asset Disposal Act, 2015.

“The management did not prepare quarterly cash flow projections and procurement plans as required,” the report reads.

The audit, in the report, exposed unexplained expenditure which could trigger concerns that the cash involved could have been embezzled.

They include an expenditure of Sh2.5 million on hospitality supplies during the 8th edition of the desert wheel race.

County did not provide procurement records to justify the regularity of the procurement process followed. Out of the amount, Sh1.45 million was not supported.

In addition, some Sh1.85 million spent on catering services was not sufficiently supported with necessary records.

Another Sh3 million paid to two suppliers for the office of the manager, municipality of Isiolo was not supported.

“In the circumstances, the accuracy, validity, and value for money for the Sh3 million expenditure for the year ended June 30, 2021, could not be confirmed,” the report reads.

This is contrary to section 76(2) of the Public Finance Management (County Governments) Regulations, 2015 which requires all foreign currency-denominated bank accounts operated by public entities to be kept at the Central Bank of Kenya.

The auditor also fingered the county executive for failing to capture in the Ifmis some Sh42.13 million advanced to staff in form of imprest in the 2017-18 financial year.

“Further, review of documents provided for audit revealed that during the year, the management expensed imprests as and when they were issued which is contrary to Section 91(1) and Section 93(5) of the PFM Regulation, 2015," report reads.

Gathungu revealed that the county’s pending bills stand at about Sh860 million.

And as the bills balloon, the county missed its own source revenue collection target by Sh66.30 million or 58 percent of its annual target.

Auditor General says payments could have been avoided, putting accounting officers on the spot
News
1 month ago

Fund was established to address historical marginalisation and unequal development in Kenya.
News
1 month ago