Ndotto says former governor should be voted back for meaningful development

• Ndotto said Kitui people should be wise and vote back Malombe during the August 9 polls.

• "It was only during his reign that Kitui ranked position three countrywide in development. What happened there after, is a story for another day,” he said. 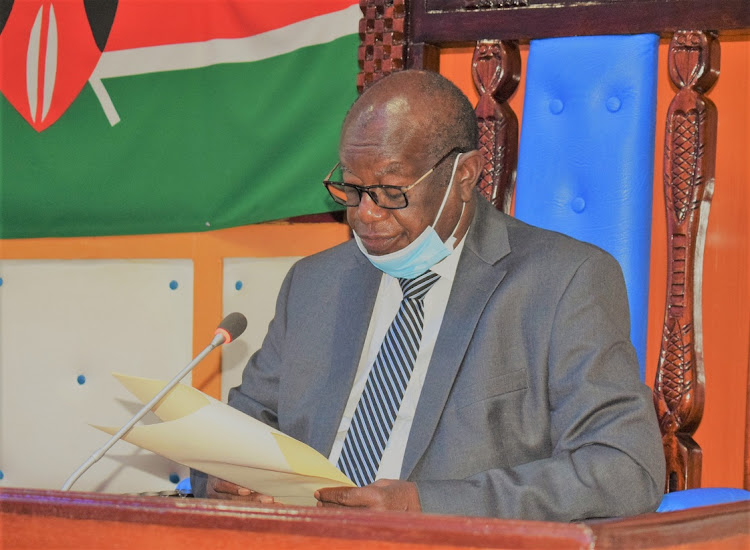 CHANGE OF HEART: Kitui assembly speaker George Ndotto making his remarks in the chambers as he opened the sixth session the second assembly on Tuesday, February 8.
Image: MUSEMBI NZENGU

Ndotto who had led a delegation of MCA’s to a luncheon hosted by Musila in 2016, has made no secret of his new found affinity to Malombe.

It is believed that the seed for Musila’s interest in governorship was sown during the get together.

During the party held at Musila’s Itoloni village home in Mwingi, Ndotto said Musila and him were inseparable.

His change of heart has thus surprised both friend and foes.

Last Sunday Ndotto who has been keeping away from campaign rallies, showed up at Malombe’s rally at Kathivo in Kitui West, where he expressed support for Malombe’s gubernatorial bid.

He said Malombe is the best among the candidates seeking the Kitui governor seat in this year’s election.

Ndotto said Malombe who is the Wiper candidate, should be voted back to office if the county is to return to the path of meaningful development.

The speaker said the last five years since Malombe left office were a waste without any tangible development.

“I was there as speaker of the Kitui assembly during Malombe's tenure and also that of his successor.

"It was only during his reign that Kitui ranked position three countrywide in development. What happened there after, is a story for another day,” Ndotto said.

He said Malombe ensured all funds released to the county were used for the benefit of the people of Kitui.

“Sadly, no one can explain what became of the Sh50 billion from the National Treasury once Malombe left office after the 2017 polls,” Ndotto said.

He described himself as an impeccable witness as he was privy to all funds Kitui county received.

The speaker however said there is little to show for the Sh10 billion that Kitui received annually for five years since Malombe left office.

He said during the period the Kitui government received at least Sh50 billion.

Ndotto said Kitui people should be wise and vote back Malombe during the August 9 polls.

Malombe and Musila have been ranked as front runners in the race for Kitui governor since it became overt that the incumbent Charity Ngilu will not defend her seat.

However, sources have indicated that Ngilu and her henchmen have thrown their support behind Musila’s candidature.

Musila said political parties were just a means to an end.
Counties
4 months ago