The region has continued to suffer attacks from Somalia based al Shabaab militants.

• Raila said that the border will be opened to enable business flow between the two countries.

• “We shall put in place all that is required to ensure operations at this border so that we can freely interact with our Somalia brothers,” he said. 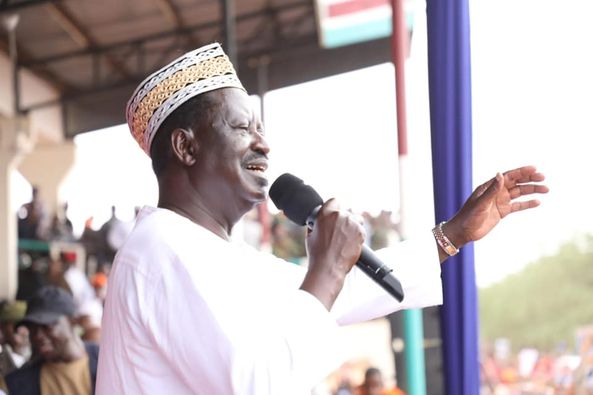 Raila said that the border will be opened to enable business flow between the two countries.

“We shall put in place all that is required to ensure operations at this border so that we can freely interact with our Somalia brothers,” he said.

The Azimio presidential candidate who was accompanied by his running mate Martha Karua and among other leaders promised to ensure security improves in Mandera and in the larger North Eastern Region.

The region has continued to suffer attacks from Somalia based al Shabaab militants.

The latest incident was on Thursday when armed militants stopped a bus coming into Mandera and lectured passengers for at least two hours.

Raila said he had stood with the region for decades noting that he has always meant good for North eastern.

The former Prime minister said his government will focus on improving infrastructure in the region so as to open it up to the rest of the country.

He cited the ongoing construction of the Horn of Africa getaway project that cuts through Isiolo, Wajir ending up in Mandera through Elwak town.

For Mandera, the ODM leader said his government will construct the Mandera-Takaba-Moyale road to ease the cost of doing business. 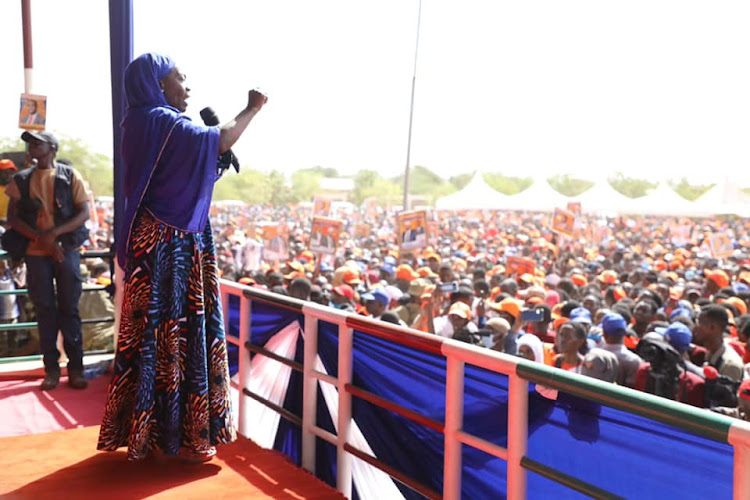 Leaders from the region led by Mandera Governor Ali Roba have been consistent in pleading with the national government to re-open the border saying that its continued closure was not only hurting business between the neighboring countries but also affecting the economy of the county.

However, their numerous pleas have never yielded much fruit.

The government closed the border in 2014 following a spate of attacks orchestrated by al Shabaab.

The move, according the government, was also meant to stop the issue of sneaking contraband goods and illegal firearms through the porous borders.

Raila also called for respect among political parties making up the Azimio coalition just hours after chaos marred the rally before his arrival.

But calm was restored after the ODM leader arrived and managed to address thousands of his supporters in Elwak and Mandera towns. 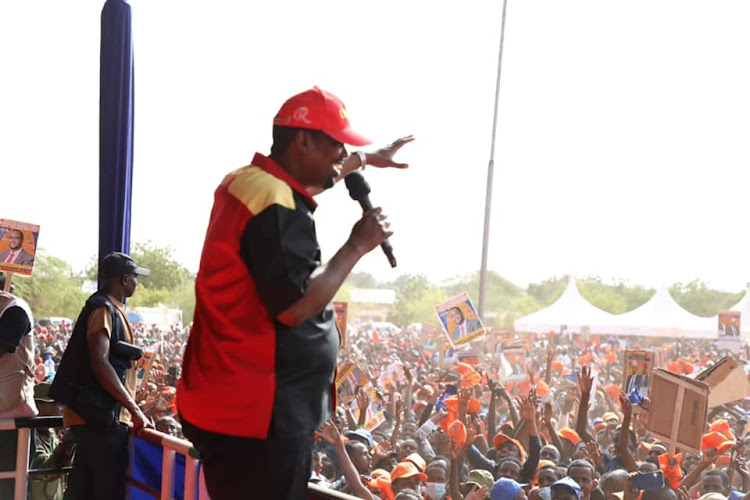 Mandera governor Ali Roba adresing residents at Moi stadium in Mandera during an Azimo rally that was attended by among others presidential candidate Raila Odinga.
Image: STEPHEN ASTARIKO

Governor Roba who has emerged as the regions political kingpin and who is the leader of UDM said as leaders from North eastern, they had unanimously agreed to support Raila for the country's top job.

“We are cognisant of the unique problems that stem from the pre-independence periods and our geography as a region, including marginalisation, insecurity, aridity leading to droughts and flooding, poor infrastructure, insufficient access to opportunities for education, poverty and famine,” he said.

Roba added: “In this regard, we reaffirm our support for the efforts of H.E. President Uhuru Kenyatta and Rt Hon Raila Odinga to unite the country as a prerequisite for national development and we will make efforts to replicate the efforts in our counties.”

Roba said their support is pegged on his past and current policy positions that they noted would take care of the socio-economic aspirations of the region, pastoralists and ASAL communities in general.

Roba said the region and leaders might have their own clan issues to deal with, but was quick to add that, it will not stand in their way to seek votes from the residents.

Azimio leader said he has a policy that will empower them against the harsh economic situations
News
1 month ago
WATCH: The latest videos from the Star
by STEPHEN ASTARIKO Correspondent, North Eastern
North Eastern
26 June 2022 - 10:28
Read The E-Paper