Duale hosts elders to consolidate votes ahead of polls

Duale has served as the MP for Garissa township since 2007. He was first elected under ODM.

• "In honour of those bonds, I hosted a delegation of over 200 leaders from the aforementioned community. It was a meeting full of retrospection," the leader tweeted.

• Duale said the nine sub-clans community of the Clan have been supporting him since 2007. 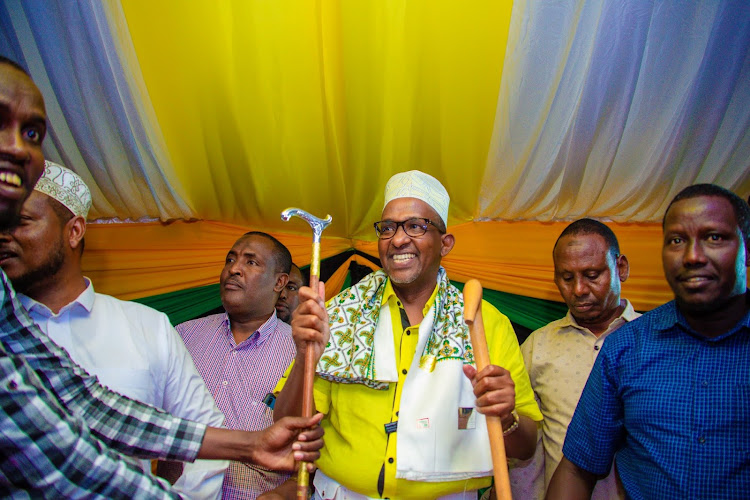 Garissa Township MP Aden Duale during a meeting with the nine sub-clans of Samawathal Clan on June 22,2022.
Image: Aden Duale/Twitter

Garissa Township MP Aden Duale on Wednesday hosted a delegation of the elders of the Samawathal clan to appreciate their support.

Duale said the nine sub-clans community of the Clan have been supporting him since 2007 adding the next five years in parliament will mark a two-decade tenure.

"In honour of those bonds, I hosted a delegation of over 200 leaders from the aforementioned community. It was a meeting full of retrospection," the leader tweeted.

He added that they agreed that even though they might not have reached where they wanted, the journey has been noteworthy.

"In our next tenure, we agreed we will expand and improve our road network, electricity connectivity, issuance of bursaries and Islamic Institutions," Duale said. 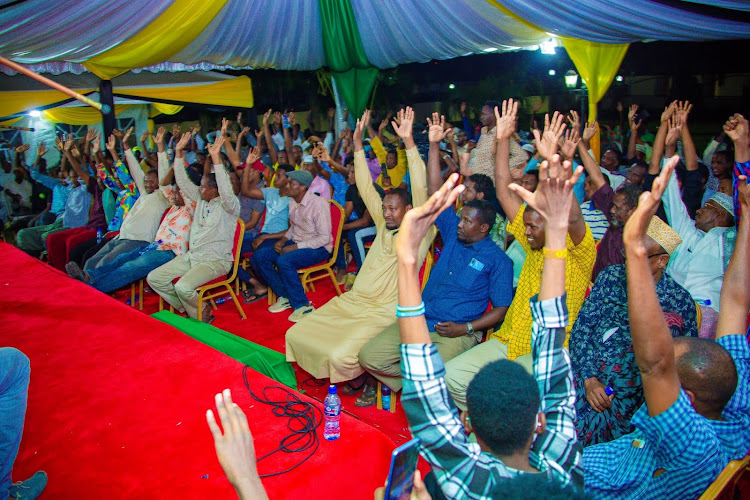 Over 200 delegates of the Samawathal Clan met with MP Aden Duale on June 22,2022.
Image: ADEN DUALE/TWITTER

The former majority leader assured them that with the Kenya Kwanza government, they are certain of building a progressive Kenya that recognizes and accommodates all.

This comes after he rallied women in the constituency to support his bid on May 30, saying they have been his cornerstone.

He lauded the rally of over 500 women he had met, saying their support helped him achieve all that he has for the last 15 years.

"Your unwavering support is what has made me an MP since 2007 when I joined politics. Without it, I wouldn’t be where I am today. I am deeply humbled and I don’t take it for granted."

The vocal politician added that women are the grassroots of a community and have special skills in gathering supporters.

Duale has served as the MP for Garissa township since 2007. He was first elected under ODM.

In 2013, he switched to URP and in 2017 he defended the seat under the ruling Jubilee Party.

He served as the first leader of the Majority Party in the 11th and 12th parliaments.

The legislator's closest rival so far is the ODM candidate Nasir Mohamed.

Mohamed on Monday met with the nine sub-clans of the Awlihan community who are endorsing him.

This will be the second time that the two have faced each other. In 2013, Mohamed narrowly lost to Duale.

Others after the seat are Siyat Osman, Abdullahi Yunis and Hassan Ali.

Say Kenya Kwanza has no support in the region and Azimio will win majority of the seats.
Counties
6 days ago

Says problems started when the state refused to reduce taxes and levies on petroleum products.
Counties
5 days ago
WATCH: The latest videos from the Star
by SHARON MWENDE
North Eastern
22 June 2022 - 22:48