Interior CS said disarmament will continue until about 3,000 firearms recovered 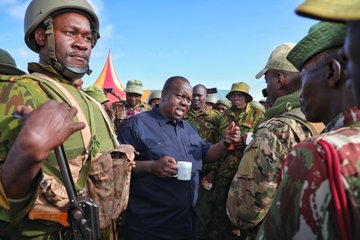 Others are combat AK-47 and G3 rifles.

Also recovered was ammunition for big guns, others used to kill big animals such as elephants, and bullets for smaller guns.

The operation was initiated last month following attacks that led to a bloodbath in the county for years.

While assessing the progress on Monday, Matiang’i said the operation will be reviewed and timelines extended to seize more illicit arms.

“We believe from intelligence there are more guns than the ones we have collected. We will review this operation when we have around 3,000 or so guns,” he said.

A chief and his assistant were among five people killed in a brazen bandit attack on April in Laisamis, indicating how ambush tit-for-tat attacks have become more daring.

“We are going to carry out a raft of other measures to ensure Marsabit remains peaceful…we don’t want temporary peace,” Matiang'i said.

The conflicts have been fuelled by politics and proximity to the border, among other challenges, the CS said.

He said investigations are underway to identify suspects linked to gun violence.

Matiang'i on May 31 extended the curfew for 30 days to enable the security operation to meet its targets.

“There shall be no public gatherings, processions or movement either alone or as a group during the period of the curfew except as has been permitted in writing by the Inspector General of the National Police Service,” he said in a special gazette notice.

Multi-agency teams are seizing guns used in attacks that have left dozens dead and thousands displaced.

Bernard Mbatha of GSU is the commander of Operation Rejesha Amani Marsabit aimed at restoring peace and security in the county and in neighbouring Isiolo.

Officials say the Marsabit operation has progressed according to the plans and police say there have been no attacks in the past two months.

More than 50 suspects are facing charges in connection with the illegal arms recoveries, killings and attacks.

The operation is being carried out by security teams from the GSU, the Rapid Deployment Unit, the Quick Response Unit, the AntiStock Theft Unit among others.

The operation started on May 2 before it was extended for another 30 days.

He is expected to inspect ongoing curfew operation.
News
7 months ago

Says hate speech and terrorism are some of the challenges the government is facing.
Counties
7 months ago