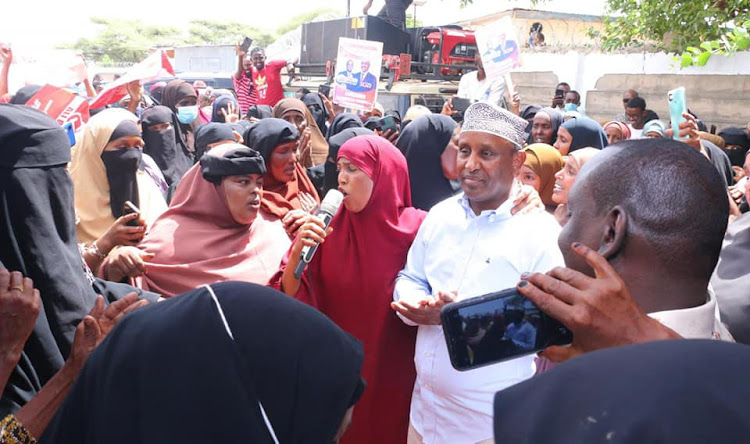 Garissa Governor Ali Korane dances to a jig with women from Garissa township during the launch of the door-to-door women campaign team at the Garissa Jubilee office on Wednesday, May 25.
Image: STEPHEN ASTARIKO

Governor Ali Korane has unveiled a women campaign team for Garissa township, that will spearhead his his door-to-door campaigns.

He said women are known to be good grassroots mobilisers and have special skills in leading the way and marshalling supporters across the county.

Korane who seeks to retain his seat through the Jubilee Party spoke on Wednesday while addressing more than 3,000 women campaign volunteers at the Garissa Jubilee office.

He said he will unveil similar teams in all subcounties because the role of women in election cannot be underestimated. 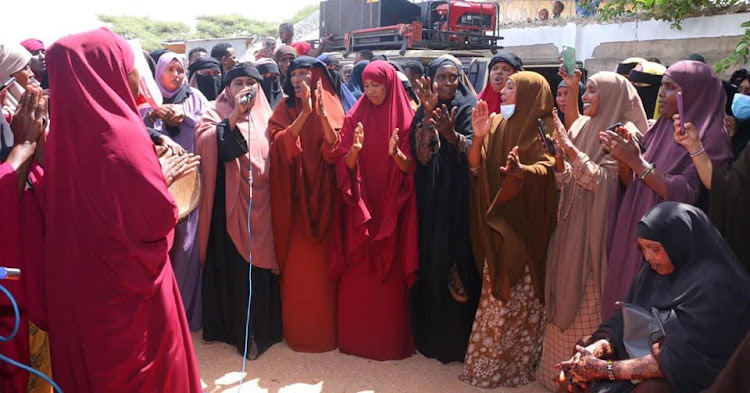 NUMBERS: Women leaders from Garissa who will be campaigning for Garissa governor Ali Korane during the launch of the door-to-door women campaign team at the Garissa Jubilee office on May 25.
Image: STEPHEN ASTARIKO

Korane said the women will be at the centre of his campaign, mobilising and passing the message to the electorates.

“I have taken a deliberate move to engage our sisters and daughters and have them on board in my campaign team. I know the strength they bring and we are growing strong each day,” he said.

The governor said his campaign volunteers should move into the villages and campaign for him and the Azimio presidential candidate Raila Odinga.

“Please take your rightful position. Go out there and seek an elective position because you have the numbers,” he said.

According to statistics, women account for more than half of Kenya's population. In 2017, 19.6 million were registered as voters translating to 47 per cent.

Korane says the numbers cannot be underestimated in an election. 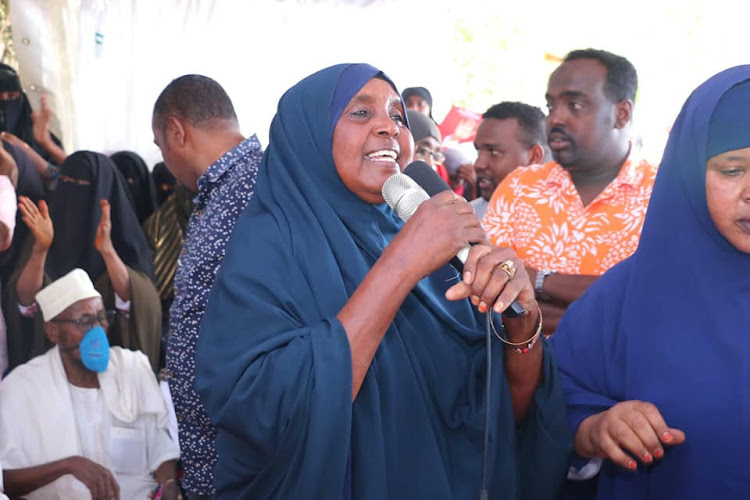 TRIED AND TESTED: Fatuma Hassan a one of the lead campaigners of Garissa Governor Ali Korane during the launch of the door-to-door women campaign team at the Garissa Jubilee office on May 25.
Image: STEPHEN ASTARIKO

Fatuma Hassan who is among those who will lead Korane’s team in the subcounty said they will embark on a vigorous door-to-door campaign to popularise Korane’s bid.

“Korane has done a lot for women, he is tried and tested. He built us a modern market that is only waiting to be opened. The rural folks no longer trek for long distances in search of water, since boreholes are all over."

"Above all, he has incorporated a good number of us in his administration. And these are facts that we will tell our people even as we embark on campaigns,” she said.

The county boss further hit out at some politicians he did not name, for concentrating on what he termed as spreading propaganda and cheap politics saying residents have no time for that. 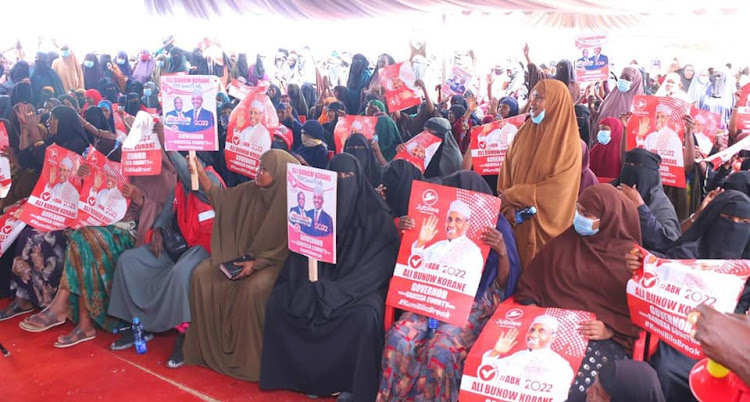 AGENDA BASED CAMPAIGNS: Women from Garissa during the launch of the door-to-door women campaign team at the Garissa Jubilee office on Wednesday, May 25.
Image: STEPHEN ASTARIKO

"Let our opponents concentrate on propaganda and cheap politics, ours will be a campaign based on goals and values.

"However, I will not sit down and watch as a few people incite our communities towards violence. The law will take its course on such individuals,” Korane said.

As elections draw closer, politicians seeking office have been crisscrossing the county rallying support from their respective communities and subclans, as is the norm.

However, as they do so, some have been accused of inciting their communities against others.

Earlier Korane had said security apparatus should be on the look out for aspirants who are out to destabilise the region through reckless utterances.

He spoke during the unveiling his running mate Adan Shaiye at Garissa Primary School play ground.

Says time has come for political mistakes to be corrected and radical transformative changes made.
Counties
1 month ago

Dagane says he was never given space to discharge his duties.
Counties
1 month ago

The Samawadhal clan have always acted as the swing votes.
Counties
3 months ago
“WATCH: The latest videos from the Star”
by STEPHEN ASTARIKO Correspondent, North Eastern
North Eastern
26 May 2022 - 22:00