Senator Haji gets boost as rival aspirant backs his re-election NEGOTIATED DEMOCRACY: Mohamed Abdi Werar and Garissa Senator Abdul Haji moments after he stepped down in his favor at Garissa hotel on Saturday, May 14.
Image: STEPHEN ASTARIKO

Garissa Senator Abdul Haji's bid to retain his seat received a major boost after his main rival stepped down in his favour.

Mohamed Abdi Werar who was contesting on a UDA ticket stepped down on Saturday during an event at a Garissa hotel.

“I am today publicly announcing that my name will not be on the ballot. I will shelve my ambition and support my bother Senator Haji and make sure that he clinches the seat,” he said.

Werar’s declaration to vie threatened to split the populous Awlihan clan votes, where he hails from.

Haji, who took over last year from his deceased father hails from the Samadahal clan. He has been endorsed by his community to retain the seat. 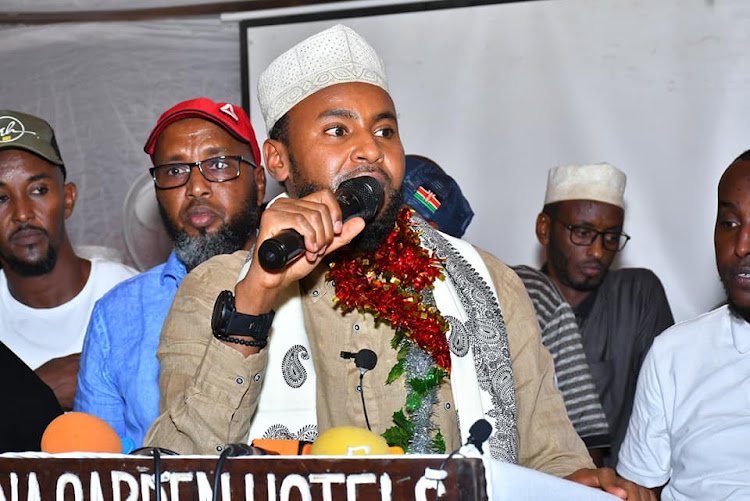 MAJOR BOOST: Garissa Senator Abdul Haji speaking at a Garissa hotel after Mohamed Abdi Werar stepped down in his favor on Saturday, May 14.
Image: STEPHEN ASTARIKO

In the clan matrix, his community was to form an alliance with the Awlihan clan after which they were to share the county seats.

Werar said the elders urged him to drop his bid and he had no choice but to oblige.

“I was more that determined to go the full throttle and win the seat because I have a feeling that matters devolution and oversight are not being done the right way in our county,” he said. 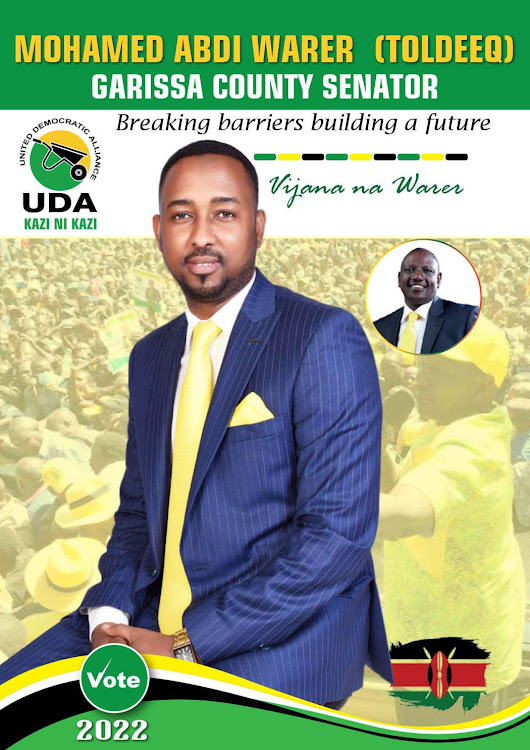 SHELVES HIS AMBITION: A campaign poster of Mohamed Abdi Warer. He stepped down in favor of incumbent Abdul Haji on Saturday, May 14.
Image: STEPHEN ASTARIKO

Haji thanked Werar for his gesture saying he will work closely with him as he is a brilliant young man with a lot to offer residents.

“I don’t take your gesture of stepping down in my favor for granted. It goes along way to show how unselfish you are. I want to assure you that we will walk this journey together until the end,” he said.

The development comes a day after Werar officially launched his campaigns for the seat.

Werar had said that he was out to break clan politics and give residents the chance to elect a leader of their choice without necessarily being tied to alliances. 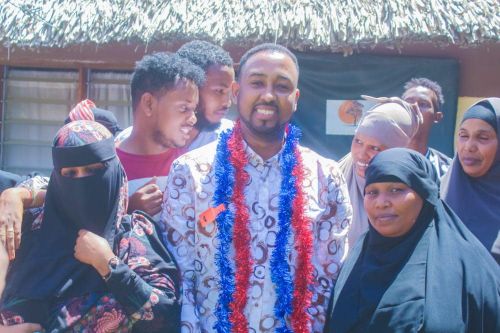 BREAKING CLAN POLITICS: Mohamed Abdi Werar who was contesting for Garissa senator with his supporters on Saturday, May 14.
Image: STEPHEN ASTARIKO

The Samawadhal clan have always acted as the swing votes.
Counties
3 months ago

Jama was endorsed by the Aulihan elders as their sole candidate for the county's top seat.
Counties
5 months ago
“WATCH: The latest videos from the Star”
by STEPHEN ASTARIKO Correspondent, North Eastern
North Eastern
15 May 2022 - 22:00