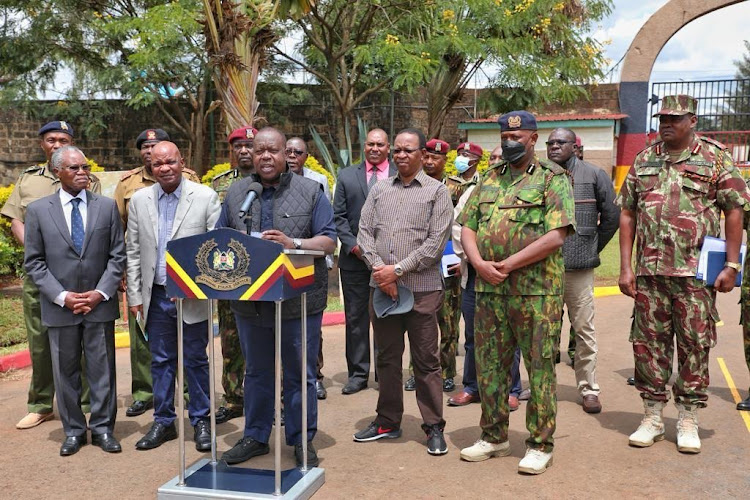 OPERATION REJESHA AMANI: Interior CS Fred Matiang'i with other security leaders during a press conference at GSU headquarters in Nairobi on Monday, May 2.
Image: CYRUS OMBATI

Eight people were arrested after police recovered five rifles with close to 600 bullets in the ongoing Operation Rejesha Amani Marsabit.

The arsenal was recovered on Tuesday evening when security teams raided a village in Manyatta Adhi Huka, 10km from Marsabit town.

The eight arrested are aged between 70 and 20. Security officials said they hope to make more recoveries.

Police said the suspects will be charged with illegal possession of weapons as they conduct further ballistic tests to establish if the weapons had been used in other crimes.

The recovery comes as other sources revealed more than 100 guns and dozens of bullets have so far been recovered in the week-old exercise.

The sources say agents in the operation have mapped various areas where the weapons are believed to be hidden and are raiding them one by one.

It is believed the guns were behind some of the attacks that were witnessed in the past months, leaving a trail of deaths and displacement.

Police said the exercise has seen calm return to the region with almost nil incidents being reported in the past weeks.

The operation is being conducted by security teams drawn from the General Service Unit, the Rapid Deployment Unit, the Quick Response Unit and the Anti Stock Theft Unit.

The exercise will also be extended to Sololo where suspected Oromo Liberation Front militias are active.

Security agencies have also mounted more roadblocks on the Isiolo-Moyale highway as part of the ongoing operation.

On May 3, a multi-agency security team manning a roadblock at Merti junction recovered an Ekol P29 pistol during a routine check on passengers plying the route.

The suspect was hiding the pistol in a bunch of miraa wrapped inside a banana leaf.

The month-long operation started on May 2 and will be extended to Kom and Merti in Isiolo county.

A pistol was recovered from a passenger on on a Moyale bound bus.
News
2 weeks ago

Their bodies were found in two cars that had been abandoned on the road.
News
3 weeks ago

More than 10 people have been killed in different areas in April.
Counties
1 month ago