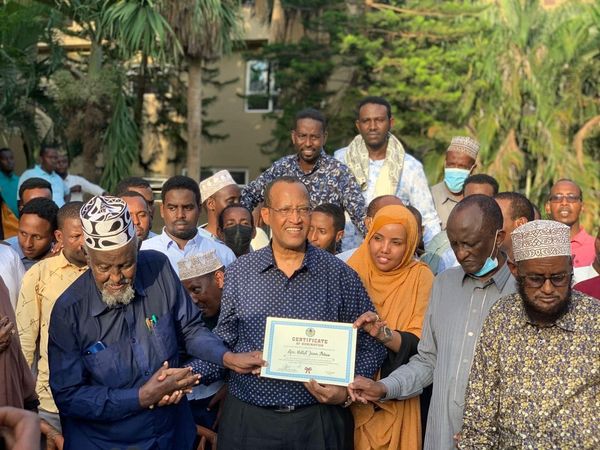 CLAN BACKING: The Aulihan clan Sultan Hamud Sheikh hands over the certificate to former Garissa governor Nathif Jama after he was declared the sole candidate from the community to contest for the governor seat in the august polls.
Image: STEPHEN ASTARIKO

Shidiye, who was Jama's main challenger, announced his decision on Tuesday.

Jama was endorsed by the Aulihan elders led by Sultan Hamud Sheikh as their sole candidate for the county's top seat.

The clan primaries verdict was much awaited akin to the general election results. Hundreds of supporters had flocked the Garissa hotel where the declarations were being made.

“Today I’m so happy because what we have been working for has now come to fruition.

"I’m happy to declare that Nathif Jama will be our sole candidate for Garissa governorship position,” the sultan said. 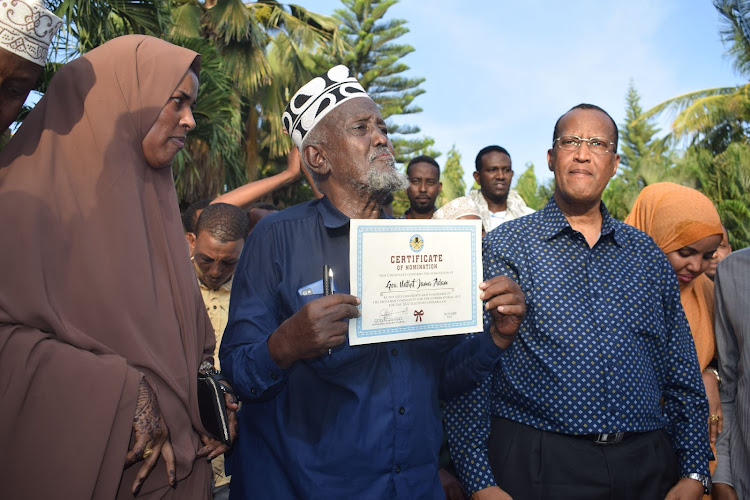 SOLE CANDIDATE: The Aulihan clan Sultan Hamud Sheikh displays the certificate before issuing it to former Garissa governor Nathif Jama after he was declared the sole candidate from the community to contest for the governor seat in the August poll.
Image: STEPHEN ASTARIKO

The sultan praised the former Lagdera MP and current envoy to Botswana Mohamed Shidiye who, he sai decided to "swallow a bitter pill" and agree with the elder's decision to front the former governor for the seat.

Shidiye was however not present at the function as he was said to have flown back to Botswana a few days before the event.

The sultan however said they had his blessings and that he had stepped down in good faith.

Shidiye seemed determined to go all the way to the ballot despite being dropped by clan elders, something political observers said could have eaten into Jama's vote basket.

Jama will now face the incumbent Ali Korane and former military man Dekow Mohamed both of whom are from Abduwak clan.

Both Korane and Jama are supporters of Raila Odinga’s Azimio La Umoja while Mohamed will vie on a UDA ticket.

Jama appreciated the efforts by local elders to come up with one candidate. He also congratulated Shidiye for shelving his ambition for the interest of the family.

“Today’s family verdict in regards to the gubernatorial position was one we were eagerly waiting for. We are bound by family decisions, the family unity is above everything else.

"As a family, we had been grouped into sections where some were supporting my brother ambassador Shidiye while others were supporting me. However, that is now water under the bridge because we are united as family,” Jama said. 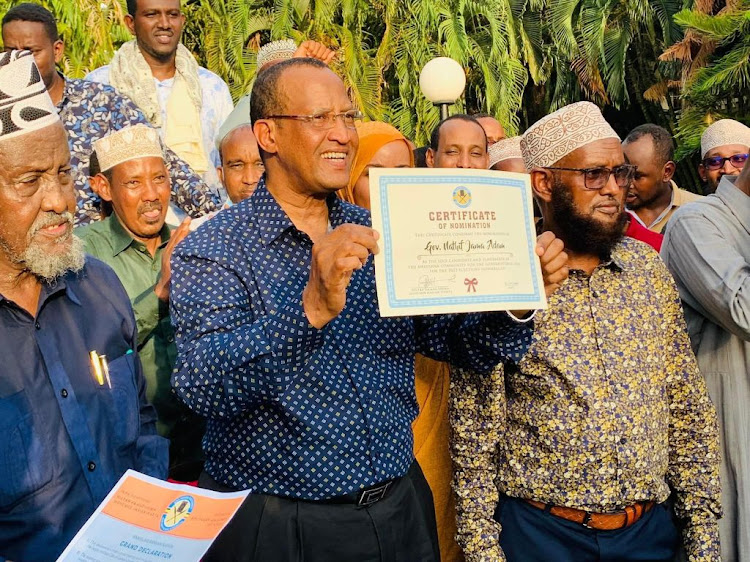 ENDORSED: Former Garissa governor Nathif Jama displays the certificate he was issued by the Aulihan council of elders after he was declared the sole candidate from the community to contest for the governor seat in the august polls.
Image: STEPHEN ASTARIKO

He asked his supporters not to celebrate as there is no winner or loser in the decision arrived by local elders.

Jama asked the residents for votes saying he will work to improve their lives through devolved units.

The former governor will now seek to partner with other clans to share other elective seats.

In terms of clan matrix, the Samawadhal who inhabit Ijara constituency in the southern part of Garissa have always acted as the swing votes.

Recently during his endorsement for a second term by his Sawadhal community, Senator Abdul Haji said various clans are in talks with the community for possible partnerships.

Local leaders however emphasised the need to have peaceful campaigns saying there is need to protect lives and properties during campaigns.

NEGOTIATED DEMOCRACY: Former Garissa governor Nathif Jama is lifted high by his community members after he was endorsed by the elders as their sole candidate for the governor seat after Mohamed Shidiye stepped down in his favor.
Image: STEPHEN ASTARIKO

Clan backing in Garissa under scrutiny in latest approvals