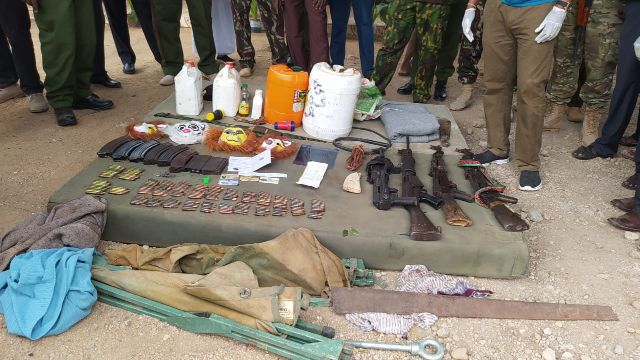 WEAPONS Weapons recovered by the police following a sting operation in the outskirts of Garissa town to weed out illegal weapons.
Image: STEPHEN ASTARIKO

Three al Shabaab militants were on Saturday killed after a bomb they were setting up went off accidentally at a village in Damasa, Mandera county.

Police said the incident happened in Nus Dariq village outside Damasa in Kenya.

The militants’ bodies were discovered long after the incident had happened on Saturday morning.

Police who attended the scene said they were yet to know the intended destination of the explosive devise.

North eastern police boss Rono Bunei said they are yet to know the identities of the dead men.

“The explosive badly damaged their bodies and experts are working on the scene,” he said.

He added they suspect the men were transporting the Improvised Explosive Devise to a target.

The area is close to the Kenya-Somalia border.

It is the same area where the terrorists have been sighted in the past month targeting security officials and other government agents on the move.

Elsewhere in Garissa, police on Sunday arrested suspected militants with four firearms among them three AK-47s and 203 bullets following a sting operation conducted last night to weed out illegal weapons.

The officers managed to recover an Efen gun with two magazines and 35 bullets, and three AK-47s with six magazines and 168 bullets, masks which the militants use to cover their face, and suspected 40 litres of gun oil.

Speaking after the operation at the Garissa police station, County Commissioner Boaz Cherutich urged the citizens to cooperate with the government by giving information on suspected persons with illegal weapons. 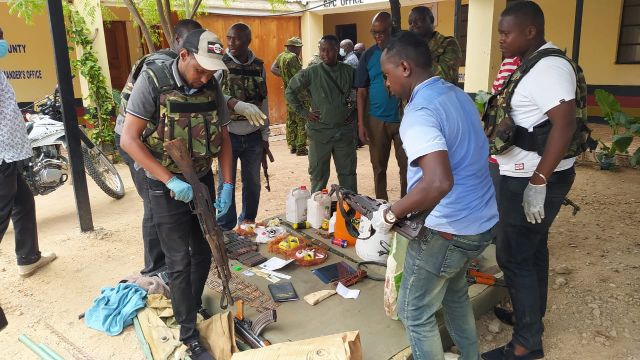 WEAPONS Police officers from Garissa with some of the weapons that were recovered in the outskirts of Garissa town.
Image: STEPHEN ASTARIKO

“We are asking the citizens of Garissa to cooperate with government and our police officers and report any suspected persons with illegal weapons so that we arrest them.”

Cherutich regretted that there has been several incidents in the past by suspected militants and terrorists that have left people injured or dead and warned that the government will not allow such incidents to be repeated.

The County Commissioner assured the residents that the security organs will continue with the same operations to ensure the festive season will be peaceful. 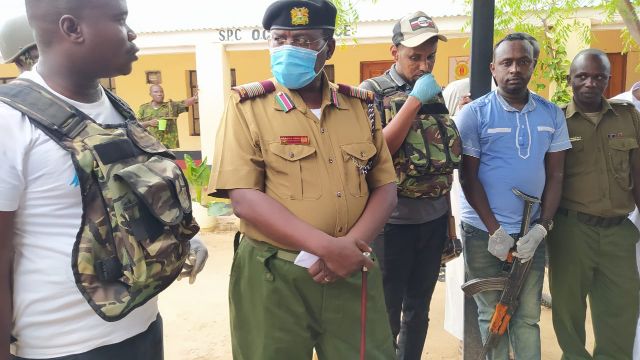 RECOVERY Garissa county commissioner Boaz Cherutich with some of the officers that were involved in the sting operation.
Image: STEPHEN ASTARIKO

He said the security operations will be conducted within the county to root out all militia groups who are terrorising the public.

The administrator said the operations do not target any clan, group of people or any family and that it will be conducted without any discrimination.

“The DCI officers have taken over this matter for further investigations so that we bring to book all those who are involved,” he said.

The arrest of the suspects comes days after the area MPs Dahiye Mohamed (Dadaab) and Sofia Abdi (Ijara) asked the county administrators to work hard to recover illegal firearms in the hands of civilians as the country readies for the 2022 general election. 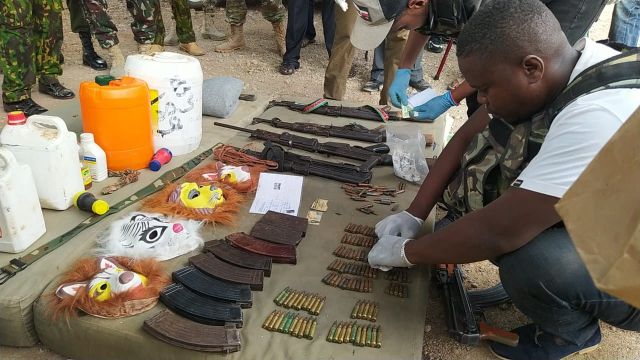 weapons A police officer from Garissa who was involved in the sting operation.
Image: STEPHEN ASTARIKO

The MPs lamented that illegal weapons were being used by militants in cattle rustling and to force residents from their lands.

Just this week, deputy county commissioners from Garissa have been meeting with subcounty peace leaders to identify key security issues and hot spot areas for action.