IT IS NOT WITCHCRAFT

•Those suffering from mental health in developing countries have been neglected and not prioritised.

•Makueni has been selected to pilot primary health care. 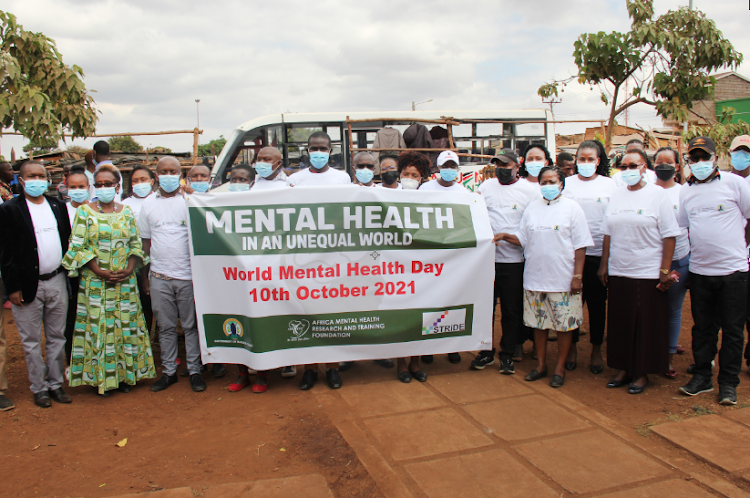 Makueni director of medical services Kiio Ndolo has urged residents to take persons suffering from mental illnesses to the hospital for treatment.

Ndolo said the condition was treatable and not witchcraft.

He said the county has enough medical personnel besides the provision of drugs to treat the patients.

“We have enough counsellors and psychiatrists at the community level who can attend to you professionally,” Ndolo said.

He spoke on Sunday during the World Mental Day celebrations at Emali Bus Park.

Ndolo said those suffering from mental health in developing countries have been neglected and not prioritised.

According to statistics, one out of 10 mentally ill persons is treated.

He said the county has been selected to pilot primary health care where community health strategists will map all households with primary needs to access medical services.

“Our community strategists will move from house to house to map out on primary needs and they will be assisted,” Ndolo said.

Speaking at the same event, Nazi Kivutha attributed the rise of mental health cases to drug and substance abuse amongst the youth.

She blamed parents for abdicating their responsibilities to their children.

Kivutha challenged them to take care of the children to curb some of the rising mental health cases.

“For a long time, parents have ignored and neglected their children who are abusing drugs instead of guiding and correcting them,” she said.

Kivutha asked the county government to construct a rehabilitation centre to help the youth who are the most affected.

“It has become expensive taking persons suffering from mental health to Nairobi, Kiambu and Nyeri for treatment yet we have experts who can be utilised here,” she said.

Makueni Deputy Governor Adelina Mwau said that the county government has been prioritising mental care and they are developing a Psychiatrist unit at the Makueni County Referral Hospital.

She said that the government has also set aside some money to support the treatment of mental health patients.

However, she did not disclose the amount.

The deputy governor who is also the acting health executive said mental cases increased during the Covid-19 period and promised that they will ensure the problem is eradicated.

“Mental well being is an important factor of production and it should be taken care of at home and workplace,” Mwau said.