•Education CAS Hassan Noor, who has declared interest in the governorship seat, regretted the low turnout of registration of voters.

•He appealed to the electoral body to come up with mobile registration centres to register eligible voters moving with their animals in search of water and pasture. 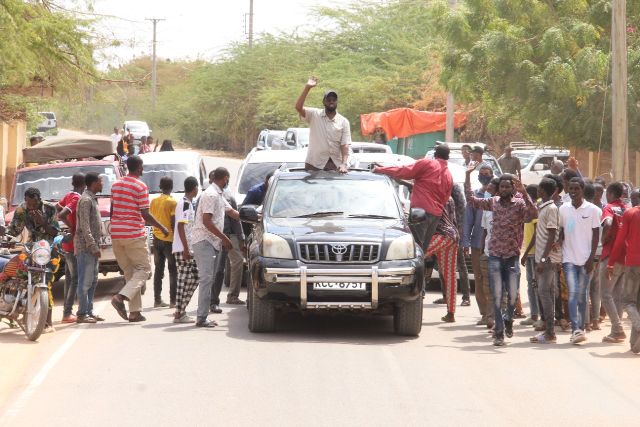 Mandera governorship campaigns have gained momentum with different aspirants moving around to try and win the electorate's support.

Different clans have been meeting as they try to solidify their votes and form strong clan alliances and subsequently share the seats.

Education CAS Hassan Noor, who has declared interest in the governorship seat, regretted the low turnout of registration of voters in all the subcounties blaming it on the current drought.

He addressed his supporters on Monday in Mandera town, where he took his Upya campaign.

Noor appealed to the electoral body to come up with mobile registration centres to register eligible voters moving with their animals in search of water and pasture.

He said with the current situation, the targets will not be met.

“I appeal to IEBC to think of how they will get to these people. The turnout is below the projection. I am worried that we might not even register half the numbers,” Noor said.

“Their priority is to salvage their source of livelihood, the livestock. Voter registration is the least of their concerns.”

Noor who contested in 2017 but lost to Governor Ali Roba further called for the second round of voter registration to capture those that will not have been registered in the first round.

He regretted that the continued closure of the border has harmed the locals whom he said depended on cross-border trade.

Noor said the time had come for an amicable solution to be found between Somalia and Kenya.

The long-time administrator said top on his priority will be to improve the lives of the residents with a focus on the youth who are the majority.

He urged residents to maintain peace and welcome all candidates in their constituencies and wards to sell their agenda without disrupting unity.

“The electioneering period is around the corner. Candidates have started warming up and asking for votes. I appeal to you to maintain peace and security,” Noor said.

“Candidates who thrive in divisive politics and are haters are not welcomed here. Let us give time to every individual seeking votes to explain themselves.”

Two weeks ago, for the first time, Roba indicated that he will vie for the senatorial seat after the expiry of his 10 year term as governor next year.

His declaration came after months of speculation.