• The borehole has a discharge of 30,000 litres of water per hour, which will be able to serve all the residents and their livestock sufficiently.

• The project was funded through the Kenya Development Response to Displacement Impacts Project. 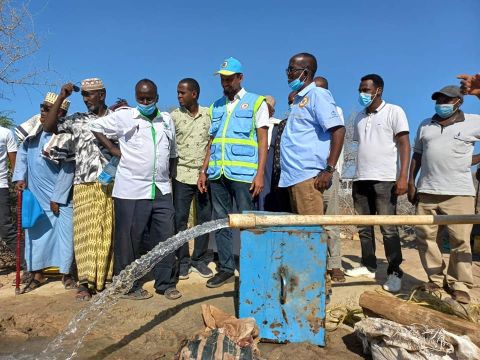 The residents of Matha-Gesi village in Fafi will now have stable water following the sinking of a borehole in the area.

Water Resources Authority’s Garissa coordinator Abdi Omar said the borehole has a discharge of 30,000 litres of water per hour, which will serve all the residents and their livestock sufficiently.

The project was funded through the Kenya Development Response to Displacement Impacts Project.

Speaking after the ‘test pumping’ of the borehole at Matha-Gesi, Garissa KDRDIP’s project coordinator Mohamed Farah said they sunk more boreholes in Fafi, Dadaab and Lagdera to help locals get water, especially during the drought season.

“KDRDIP has so far funded the drilling of nine boreholes in Fafi subcounty. We have fully equipped two boreholes, which are already in use and we are in the process of equipping the rest,” Farah said

“We are facing a severe drought in this region and I now hope this borehole is going to alleviate water scarcity in this constituency,” he added

Farah added that KDRDIP is going to drill seven more boreholes in the subcounty targeting areas that lack water to ensure the communities have sufficient and quality water for human consumption.

Area chief Aden Shidodama said although most people had moved to other regions in search of water and pasture for their livestock, the presence of a water source in the area will bring them back.

He added that security will improve when residents set up permanent structures and settlements.

“If people settle here, we will be able to know our neighbors well because now, with people moving in and out searching for resources, we cannot tell who is the enemy. With a permanent water base, we will have permanent settlement and that will improve our security,” Shidodama said

The chief urged the community to set up a management committee to take care of the water project and ensure the borehole does not break down or get vandalised.

Fafi MP Abdikarim Mohamed thanked KDRDIP for initiating projects in the constituencies, which have improved the lives and livelihoods of the people hosting refugees.

KDRDIP is a national government initiative, supported by the World Bank to improve the lives of the refugee-hosting communities in the north of the country and is expected to be completed by April next year.

It is community-driven development where communities identify, plan, implement, monitor and sustain their own development projects.

The projects identified by the communities are integrated into the community development plans before they receive funding.