There were three boreholes, construction of patients’ wards and staff residency at Dertu health centre

• Devolution CS said the government will seek to have the World Bank project for five more years.

• He thanked the communities for their continued support in hosting refugees. 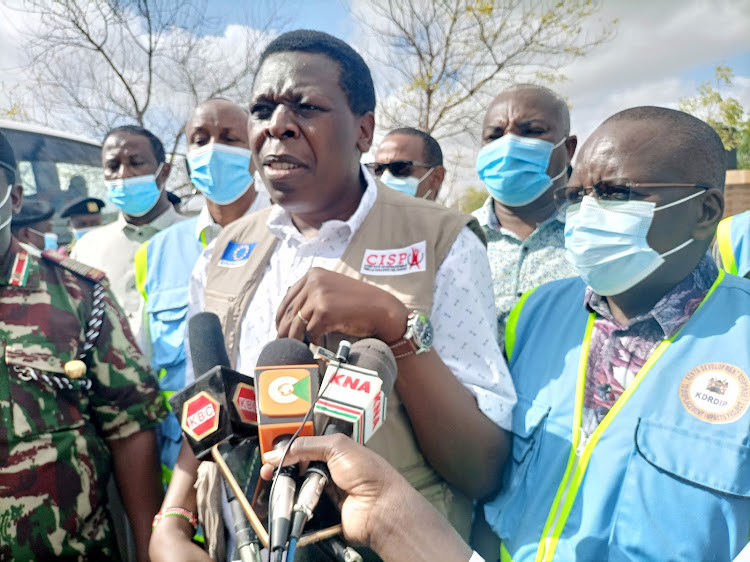 Communities hosting refugees in the Northeastern region have started ripping the fruits of the government’s support through the Kenya Development Response to Displacement Impacts Project.

The projects were three boreholes, construction of patients’ wards and staff residency at Dertu health centre in Dadaab constituency and two boreholes in Fafi constituency.

Wamalwa said the boreholes will ensure a sufficient supply of water for both human and livestock consumption, especially during drought seasons.

“With these boreholes, you will have enough water. We will also increase water trucking to areas which do not have boreholes,” he said

Wamalwa also visited the Lamahuran farm in Fafi that was started by a help group after receiving Sh500,000 grant from KDRDIP.

The farm’s chair Abdullahi Abdi said that the group had been making huge profits from selling the farm produce.

“We have also been selling mangoes from this farm, which on a good season we make Sh200,000 profit.”

The CS revealed that from the positive impact the project has had on the communities, the government will seek to have the World Bank project for five more years.

He said that the government will release Sh1.4 billion this financial year for Garissa and thanked the communities for their continued support in hosting refugees.

“We know it has not been easy but as the international community grapples with the issue of refugees, now, and in the future, we must thank particularly those who have hosted them in Dadaab and Kakuma,” Wamalwa said

“We know the impact that this has had on the communities and that is why we are here with the World Bank support to see how to improve livelihood and deal with the impacts it has had on your lives as well as the environment.”