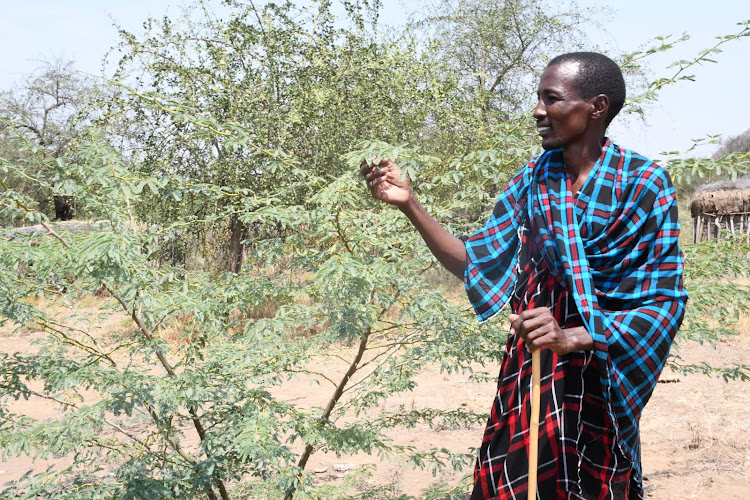 Benjamin Rakwa of Olodonyonyoki Group Ranch in Magadi, expalins how the Mathenge tree (an invesive species) have taken over their grazing lands replacing the grasses. The Mathenge tree is dangerous to livestock when consumed and can cause teeth damage in goats and sheep.
Image: Stephen Odipo/KALRO

Pastoralists in arid and semi-arid areas have been urged to rear high-quality livestock breeds that can adapt to the effects of climate change.

Livestock PS Harry Kimtai said one of the biggest challenges in managing rangelands is sustainability.

Most counties in northern Kenya have been worst hit by the drought. The situation is so severe that President Uhuru Kenyatta last week declared the drought a national disaster.

“We need to look at the livestock that we are keeping. We need to change from allowing livestock to graze in the rangelands for a longer period of time like five years before offloading the animal into the food system. This trend interferes with the rangeland and it leads to degradation,” PS Kimtai said.

He said improved animals are those that would attain the market weight within a short period so that the farmer is able to dispose of them. This, he said, will ease pressure on the rangelands that are currently degraded.

The PS spoke during a media briefing on the upcoming joint International Grassland and Rangeland Kenya 2021 Congress at the Kenya Agricultural and Livestock Research Organisation headquarters in Nairobi.

Kimtai called for more research on grass varieties that are resilient to drought.

“This is because our grass dries very fast and regeneration becomes a problem. It takes a long time to regenerate especially where the rangeland has been overgrazed.

"There is a lot of connection between research and sustainability of our rangelands, and we need to take our pastoralists through these challenges and how to overcome them,” he said.

Professor Jesse Njoka from the University of Nairobi and a member of the congress sub-committee said the productivity of the country’s rangeland is declining because of overgrazing.

“There is also a change of vegetation where desirable grasses are being replaced by undesirable grasses. Prosopis or the Mathenge tree, as it is locally known, is taking the best of our agricultural land,” Njoka said.

He said though the Mathenge tree can be used for other things, trying to revert the land to farming is very expensive because one needs big tractors to uproot those invasive species.

Njoka noted that the culture of people in the rangeland is also changing as they opt to settle in one place instead of the nomad lives they were previously used to.

“People are settling down particularly in the north. Villages are now coming up because they can no longer move from one place to another as the rangeland is degraded," he said.

"This means they are becoming more and more reliant on food aid/support. We, therefore, need to equip those pastoral communities with new skills to support themselves otherwise the GDP will go down every time we have a drought situation like what is currently happening.

“This is because you have to look for resources to feed those people. But for how long can we continue sustaining people in the old system that is declining?”

The don pointed out the need to reclaim degraded land but added that this needs a change of mindset.

“It is expensive because whereas some communities have protected areas for farming, on the other hand, you have a culture where people feel that land is for everybody and due to lack of resources, conflicts are emerging.

"We have dry and wet season grazing areas. The dry season grazing areas are also good for crops, and you can see what is happening in Laikipia. Pastoralists sometimes move until where the settled farms are and they cannot go back because there is nowhere else to graze,” Njoka said.

He said authorities need to anticipate some of those problems and find a way of restoring the rangelands.

Data from the Department of Livestock shows that rangelands occupy 80 per cent of Kenya's land and are home to about 10 million people.

The rangelands support about 70 per cent of the national livestock population and 90 per cent of wildlife that is key to the tourism industry.

“Unfortunately, the productivity of these rangelands has been greatly affected by the frequent droughts and floods that characterise the impacts of climate change and variability,” Kimtai said.

The PS said the Kenyan rangelands, especially the ASALs, are susceptible to changes of weather and are characterised by high incidents of poverty and malnutrition that require frequent relief assistance.

“The situation has been worsened by increasing human population and consequent shrinkage of the rangeland resource base and rural-urban migration in search of alternative livelihoods,” he said.

Grasslands form the bulk of feed for livestock both in the rangelands and the high potential areas. However, there are many changes limiting the contribution of grasses to the productivity of livestock. These include dependence on a few grass species and overgrazing.

The impacts of drought on the population have been increasing exponentially since the 1970s. This has threatened the sustainability of rangeland resources and created economic and environmental challenges that need urgent attention to safeguard the well-being of the communities in those areas.

Kimtai said urgent measures and interventions are required to protect the rangeland resources and enhance their sustainable use.

“Investment in the rangelands monitoring, rehabilitation and improvement will greatly contribute to the attainment of food and nutritional security as envisaged in the Constitution of Kenya and the Vision 2030, and in line with the global Sustainable Development Goals."

Kalro director-general Eliud Kireger said the move will facilitate commercialisation of the varieties and make the seeds readily available to farmers for the establishment of new pasture fields and restoration of degraded rangelands.

The organisation has also collected and conserved a gene bank of over 300 grass accessions from northern and southern Kenya rangelands.

“It is from this germplasm that more cultivars and varieties will be developed,” Kireger said.

The congress will bring together experts with vast research experiences in rangelands and grasslands.

The PS said they will concretise recommendations on the uses of grassland and rangeland resources to meet the increasing competing demands for livestock, wildlife and commercial/industrial use in a world under changing climate.

The theme of the congress is 'Sustainable Use of Grassland and Rangeland Resources for Improved Livelihoods'.

Grasshoppers spotted in parts of the county; have started to harm crops and pasture.
Counties
1 year ago
by AGATHA NGOTHO and MUSA NTIRORI
North Eastern
15 September 2021 - 22:00