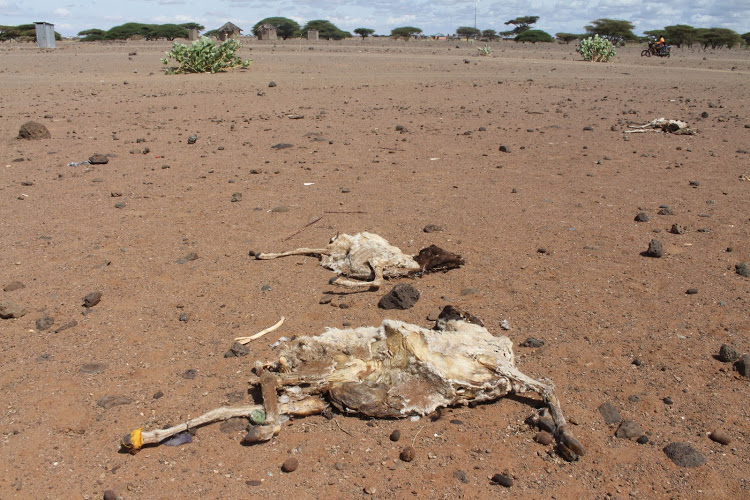 At least 1.4 million people are surviving on donated food in Northern Kenya.

This is due to the ongoing drought that has hit hard some of the counties in the region, including Mandera, Isiolo, Garissa, Marsabit, Tana River, Baringo and West Pokot.

The Kenya Red Cross Society said the situation could last until the end of the year, based on the current weather forecast.

The drought is a result of the La Nina dry weather.

Red Cross predicts the situation could stabilise from October only if the short rains season will bring adequate rainfall.

It has already appealed for Sh800 million to reach all drought-hit Kenyans.

But even as the society predicts stabilisation, a new report by Intergovernmental Panel on Climate Change shows that matters will get out of hand.

The report that was released on Monday provides new estimates of the chances of crossing the global warming level of 1.5°C in the next decades and finds that unless there are immediate, rapid and large-scale reductions in greenhouse gas emissions, limiting warming to close to 1.5°C or even 2°C will be beyond reach.

It shows that emissions of greenhouse gases from human activities are responsible for approximately 1.1°C of warming since 1850-1900, and finds that averaged over the next 20 years; global temperature is expected to reach or exceed 1.5°C of warming.

This assessment is based on improved observational datasets to assess historical warming, as well progress in scientific understanding of the response of the climate system to human-caused greenhouse gas emissions.

The report projects that in the coming decades, climate changes will increase in all regions.

For 1.5°C of global warming, there will be increasing heat waves, longer warm seasons and shorter cold seasons, it says.

UN secretary-general António Guterres said the evidence is irrefutable: greenhouse gas emissions are choking our planet and placing billions of people in danger.

"Global heating is affecting every region on Earth, with many of the changes becoming irreversible. We must act decisively now to avert a climate catastrophe," he said.

Kenya is already grappling with rising lakes, droughts among others.

The country is highly dependent on climate-sensitive natural resources such as rain-fed agriculture, water, energy, tourism, wildlife and health.

An analysis of climate trends in 21 ASAL counties between 1977 and 2014 showed an increase in temperature, with five counties surpassing 1.5 degrees celsius.

In 2016 Kenya ratified the Paris Agreement and submitted ambitious Nationally Determined Contributions with a commitment to reduce emissions by 30 per cent by 2030.

Environment PS Chris Kiptoo says the updated NDC increases mitigation commitment from 30 per cent in 2016 to 32 per cent by 2030.

The NDC also commits to enhance resilience in all sectors of the economy, Kiptoo says.

For instance, climate change is intensifying the water cycle.

In high latitudes, it says, precipitation is likely to increase, while it is projected to decrease over large parts of the subtropics.

Changes to monsoon precipitation are expected, which will vary by region.

"Extreme sea-level events that previously occurred once in 100 years could happen every year by the end of this century."

The report warns that further warming will amplify permafrost thawing, and the loss of seasonal snow cover, melting of glaciers and ice sheets, and loss of summer Arctic sea ice.

It says changes to the ocean, including warming, more frequent marine heatwaves, ocean acidification, and reduced oxygen levels have been clearly linked to human influence.

"These changes affect both ocean ecosystems and the people that rely on them, and they will continue throughout at least the rest of this century".

For the first time, the Sixth Assessment Report provides a more detailed regional assessment of climate change, including a focus on useful information that can inform risk assessment, adaptation, and other decision-making, and a new framework that helps translate physical changes in the climate – heat, cold, rain, drought, snow, wind, coastal flooding and more – into what they mean for society and ecosystems.

The report says human influence has warmed the climate at a rate that is unprecedented in at least the last 2000 years.

The report also shows that human actions still have the potential to determine the future course of climate.

The evidence is clear that carbon dioxide is the main driver of climate change, even as other greenhouse gases and air pollutants also affect the climate.

Climate change is already affecting every inhabited region across the globe with human influence contributing to many observed changes in weather and climate extremes.

The report says heating of the climate system has caused global mean sea level rise through ice loss on land and thermal expansion from ocean warming.

Thermal expansion explained 50 per cent of sea-level rise during 1971– 2018, while ice loss from glaciers contributed 22 per cent, ice sheets 20 per cent and changes in land water storage eight per cent.