The victims included a forest officer and two civilians 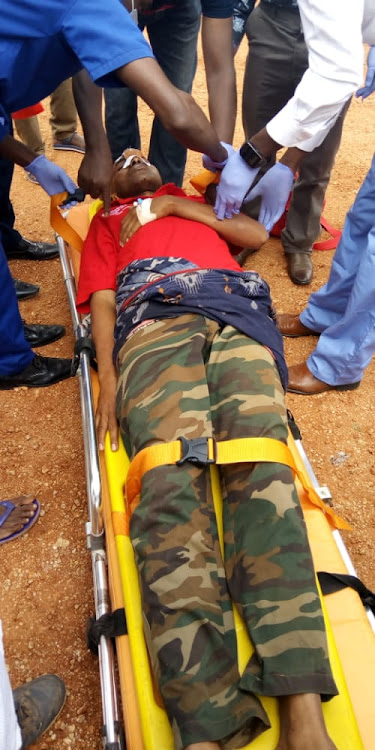 One of the KWS wardens injured in an attack in Takaba on June 9, 2021 being evacuated to Nairobi for further treatment on June 10, 2021
Image: CYRUS OMBATI

The Wednesday attack was suspected to have been set up by militants operating in the area.

Four people were also injured when the bomb went off.

The attackers shot at the survivors who were fleeing and later torched the vehicle.

The victims included a forest officer and two civilians.

On his Facebook page, he said, "I wholeheartedly condemn the cowardice terrorism acts happening in our beloved Mandera County of late."

"The most recent one being the one near Takaba which claimed three innocent lives and injured others. As leaders, we shall revisit all previous plans we had to fight this back."

Haji sent condolences to the families and friends of the fallen soldiers and civilians.

Meanwhile, witnesses said the survivors ran away from the scene of the attack as they were being shot at.

Locals said they had shared intelligence on the sightings of the suspected attackers.

President Uhuru Kenyatta on Wednesday said some local leaders are staging the attacks and blaming al Shabaab.  He said those behind the attacks will soon be exposed.

Uhuru said the government is aware that some leaders use the name of the terror gang to trigger inter clan attacks.

“Don’t use the name of al Shabaab to cause inter clan attacks. We are aware and urge you to stop it before we take decisive action,” Uhuru said.

He spoke while burning an assortment of illegal weapons in Ngong.

His remarks suggested that some of the fatal attacks that have been witnessed in parts of Northeastern could be staged by locals.

The gang also torched a police vehicle after the ambush in Banisa, Mandera county. Officials believe the attack was staged by local militia.

At least seven police officers and 11 civilians were injured in the attack.

On the same day, another gang shot at a police camp in Kutulo in Wajir county.

It is the latest incident to happen in the area in a series that are staged by al Shabaab gunmen roaming there.

Last month, the gang also tried to attack a communication mast in Afaat in Wajir county but they were repulsed. Three attackers were killed.

Police have been mounting operations in the areas to deter their plans. The terrorists have been targeting security installations which they destroy.

This has mainly affected the education sector which has forced hundreds of teachers to flee.

The area is near the Somalia border and the militants usually cross at will and stage attacks before escaping back.

Al Shabaab insurgents have been attacking places in the region especially in Mandera and Garissa counties after breaching security zones.

This has left dozens of civilians and security officials dead or wounded.