They attempted to destroy communication mast in Tarbaj area

• Police said they recovered two AK47 rifles with 10 magazines from the group.

• Authorities said one Kenya Police Reservist was killed and two others injured during the 4am incident. 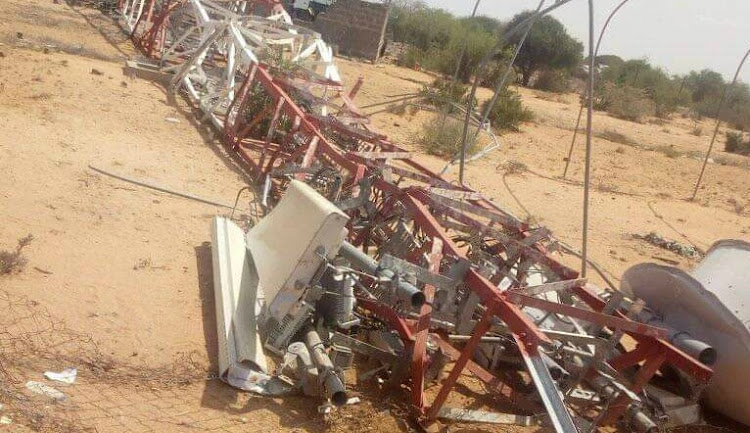 Two al Shabaab insurgents were killed in a clash with police as they tried to destroy a communication mast in Tarbaj area, Wajir county on Wednesday.

Police said they recovered two AK47 rifles with 10 magazines from the group.

The attackers had targeted a communication mast in Afaat centre when police were alerted.

Authorities said one Kenya Police Reservist was killed and two others injured during the 4am incident.

Police said al Shabaab attacked another mast located between Wargadud and Ungay, a small village known as Sango, Mandera county, leaving many in the area without a phone network.

Two Kenya Police Reservists were killed in the incident that happened at about 2am.

Multi-agency teams were dispatched to the area to pursue the attackers.

On Monday, a team of security officials countered an ambush conducted by the militants in Lamu near the Kenya-Somalia border and killed two of the attackers.

Northeastern regional police boss Rono Bunei said they believe the number of killed militants is higher and police were pursuing them.

“We repulsed them as they attempted to destroy the masts. Our forces are pursuing them,” he said.

Bunei said the attackers used rocket-propelled grenades in their attacks in Afaat centre.

The attack came days after intelligence reports showed the militants were marshalling along the border in Lamu and Mandera areas in readiness for attacks in Kenya.

Police have been mounting operations in the areas to deter their plans.

The terrorists have been targeting security installations in the area and destroying them.

This has affected among others the education sector forcing teachers who are non-residents to leave.

The area is near the Somalia border and the militants usually cross at will and stage attacks before escaping back.

Al Shabaab insurgents have been attacking places in the region especially in Mandera and Garissa after breaching security zones, which left dozens of civilians and security officials dead and wounded.

They have been planting explosives on the routes used by the security agencies.