He said the MCAs have not given dialogue a chance; they were being used by politicians in Nairobi

•Abdi appealed to MCAs to sober up and give honest dialogue a chance to attend to the more pertinent issues.

•Several court orders have been issued stopping the MCAs from debating the impeachment motion. 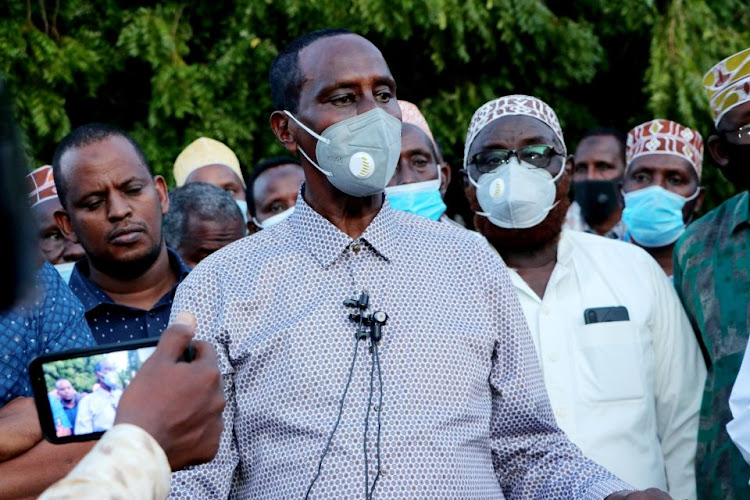 Wajir Governor Mohamed Abdi who is facing an impeachment motion has claimed that his woes are politically instigated.

Speaking to the press on Tuesday at his residence, on the day that MCAs were supposed to debate his impeachment, Abdi said it was evident that some external forces were driving the agenda to have him out.

The governor said the MCAs have not given dialogue a chance saying they were being used by politicians in Nairobi.

“The MCAs are being used by some politicians in Nairobi. Some are eyeing the Wajir top seat in 2022. I want to tell those using the county assembly to spread the gospel, that their days are numbered.”

“I have the Wajir people behind me and I will defeat them during the elections. Meantime, I will do everything through my lawyers to defend my seat,”  he said.

The governor said less than a week before filing the notice of impeachment he had a discussion with a majority of the MCAs.

He said he did not receive any major grievances other than their quest for payment of car grants.

“I took their request made by the speaker and the clerk of assembly seriously and factored the total amount to Sh102 million in the first supplementary request for this financial year, submitted to the assembly who later returned it.”

“It is regrettable that our  MCAs have not exhausted all the existing avenues to resolve disputes with the county executive but have instead played into the hands of individuals with political intent to destabilize the operations of the county government,” he said.

Abdi appealed to MCAs to sober up and give honest dialogue a chance to attend to the more pertinent issues that require their attention.

He also appealed to the public to desist from social media propaganda and hate but instead preach peace and harmony.

The impeachment motion comes barely four months after the MCAs filed another motion.

Several court orders have been issued stopping the MCAs from debating the impeachment motion. The latest court order was issued by the Meru high court.

The governor's lawyers led by Ndegwa Mwangi served the assembly with court papers despite earlier efforts by the assembly chamber to block the lawyers from accessing the assembly precincts.

The MCAs, however, vowed to go on with the impeachment motion.

On April 20, the MCAs served speaker Ibrahim Yakub with an impeachment motion.

They gave the governor a one-week ultimatum to face the assembly to answer to several charges level against him.

Among the charges, are gross violation of the constitution and abuse of office.