•The militants first hit the vehicle using an Improvised Explosive Devise which set fire on the ambulance.

•The husband of the expectant mother died in the attack. 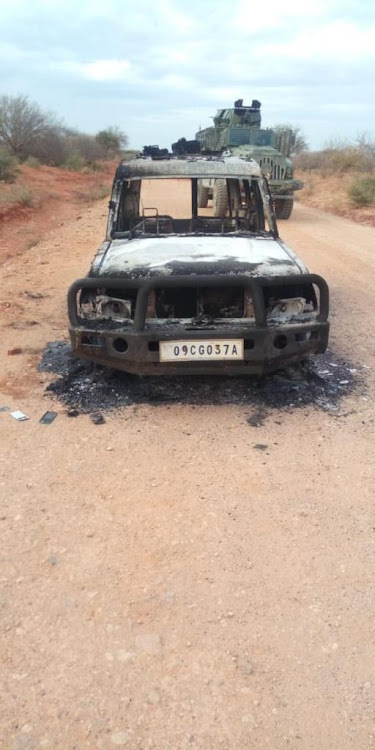 Al Shabaab militants attacked an ambulance ferrying a pregnant woman to hospital and killed her husband in latest incident in Mandera County.

The ambulance was on the way to Elwak Referral Hospital when it came under attack by gunmen.

The militants first hit the vehicle using an Improvised Explosive Devise which set fire on the ambulance.

The husband of the expectant mother died in the attack while two others including the nurse and driver on board were injured in the Wednesday incident.

The survivors were taken to the Elwak hospital with multiple injuries but were stable, police and locals said. “The expectant mother is in hospital in labour. We have deployed officers to hunt down the attackers,” said North eastern police boss Rono Bunei.

The attack comes days after seven al Shabaab terrorists were killed by Kenya Special Forces soldiers in a raid in their camp in the vast Boni Forest, Lamu County.

The officers said they killed the terrorists and recovered communication equipment and weapons that were being used by the terror group to wreak havoc in the Lamu area that borders Somalia.

During the attack near Bothai the soldiers also arrested one terrorist and are holding him for interrogation.

There have been fears of attacks in the area bordering Somalia in the past weeks.

A week ago, al Shabaab abducted and beheaded a chief in Wajir county. They had abducted a group of local security officials together with the chief before they released them and later killed the administrator.

Omar Buul was abducted from the village when a gang of al Shabaab raided the area. They then went with the administrator for unclear reasons.

Buul's remains were found on the roadside between Khorof Harar and Konton by herders. The herders called police who took the remains to the local mortuary.

Security agencies are on alert in the border area following reports the terrorists are planning an attack.

The border region has borne the brunt of repeated attacks from the militants.

More personnel have since been sent to the area and operations by the Border Patrol Unit heightened to tame the surge. Kenyan troops are in Somalia to pursue and suppress the activities of the terror group.

Post a comment
WATCH: The latest videos from the Star
by STAR REPORTER
North Eastern
30 December 2020 - 13:14
Read The E-Paper