State has 300,000 litres of chemicals to fight locusts, says PS

Swarms in the current second wave are likely to be more damaging, says Boga

• First invasion of the second wave of desert locusts from Somalia and Ethiopia was reported on November 9, 2020. 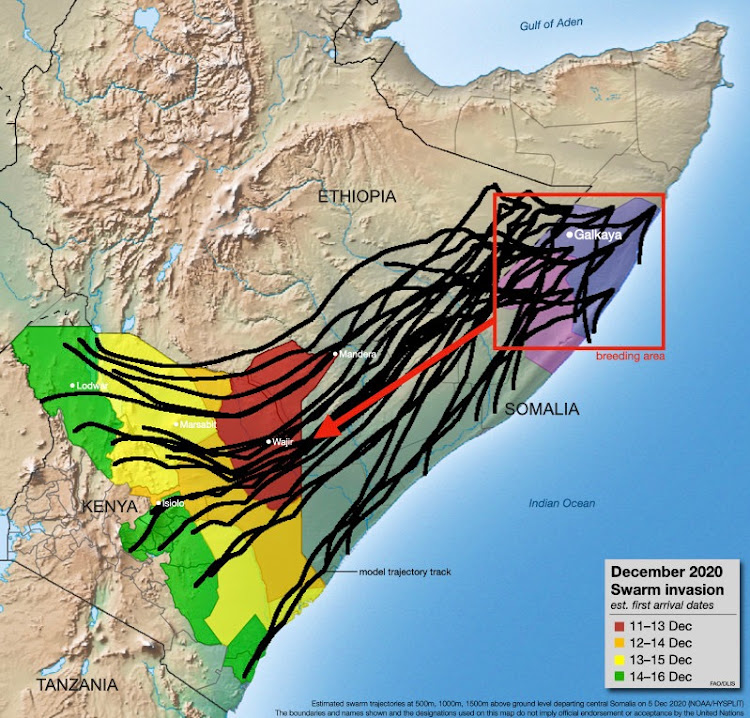 The government has 321,340 litres of pesticides to control the second wave of desert locusts invasion, Agriculture PS Hamadi Boga said on Monday.

The pesticides include 286,040 litres at seven control bases and 35,300 litres at the main store in the Plant Protection Services Division.

Boga said base managers and support personnel have already been redeployed to their respective stations.

“Six control bases in Isiolo, Masinga, Marsabit, Lodwar, Wajir and Garissa were re-activated in line with the second wave of desert locust threat,” Boga told the Star in an interview.

“With current reports of desert locust sightings in coastal counties, a control base has been set up in Witu, Lamu county, to serve the region. Mandera has also been declared a base due to logistical issues in the control operations totalling to eight control bases.”

Locusts swarms in the second wave are likely to be more damaging, the PS said.

Boga said they have also deployed surveillance and control teams in the affected counties. There are two surveillance helicopters and three spray aircraft.

The PS said the first wave of desert locusts in Kenya was contained in late December 2019. However, there were remnants in Suguta Valley, which could not be controlled due to insecurity in the area and a rough terrain.

“These have emerged in Ndoto hills, Samburu county, but ground control is on to contain the hoppers,” he said.

Data from the United Nations Food and Agriculture Organization indicates that the country was invaded by a second wave of desert locusts from Somalia and Ethiopia on November 9, 2020.

Boga said the desert locusts came in when they were mature and yellow, just looking for good soils to lay eggs.

“In the county of Taita Taveta where the invasion was early, hatching is taking place. The ground teams have moved in to control the hoppers. As part of the preparation measures to contain the second wave of invasion, training and sensitisation are ongoing in the frontline counties in line with the Covid-19 precautionary guidelines,” he said.

According to FAO locust watch update released on December 10, immature swarms are forming in central Somalia and eastern Ethiopia.

They are expected to move south towards southern Somalia and Southeast Ethiopia, where they could start arriving in Northeast Kenya this weekend.

“This movement is anticipated to increase during the remainder of December and into January. Intensive survey and control operations should be maintained in Ethiopia and Somalia," FAO says.

"Extreme vigilance and preparedness are required in Kenya, and close monitoring should continue along both sides of the Red Sea.”

Swarms are from substantial breeding in eastern Ethiopia and central Somalia.
News
2 years ago

Locusts to invade 20 counties before Christmas