Travellers are now forced to cross the flooded road on foot, risking lives

• More than 30 trucks laden with both perishable and non-perishable goods destined for Mombasa and Garissa are stuck for kilometres either way.

• Fruits like mangoes and watermelons have started rotting, a huge loss to truck owners and merchants. 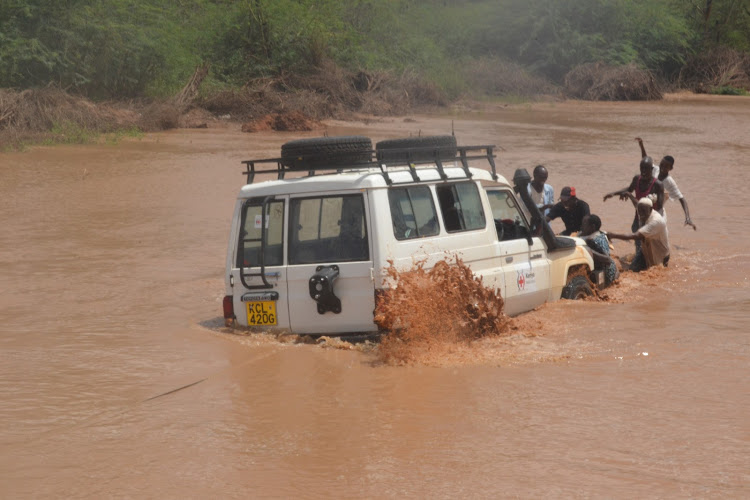 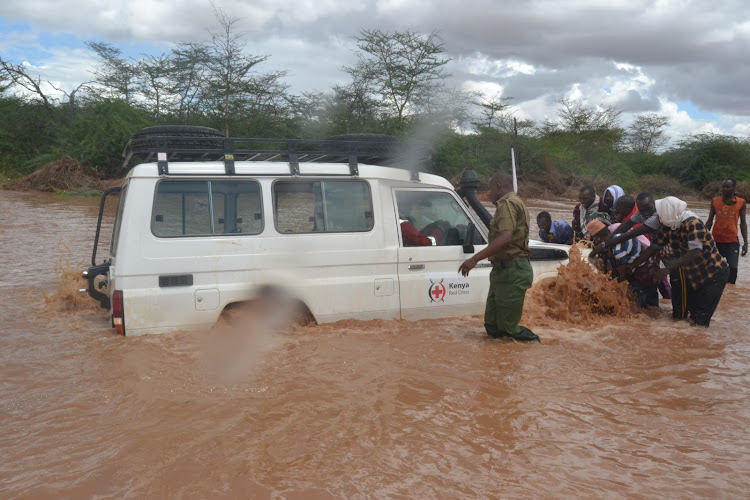 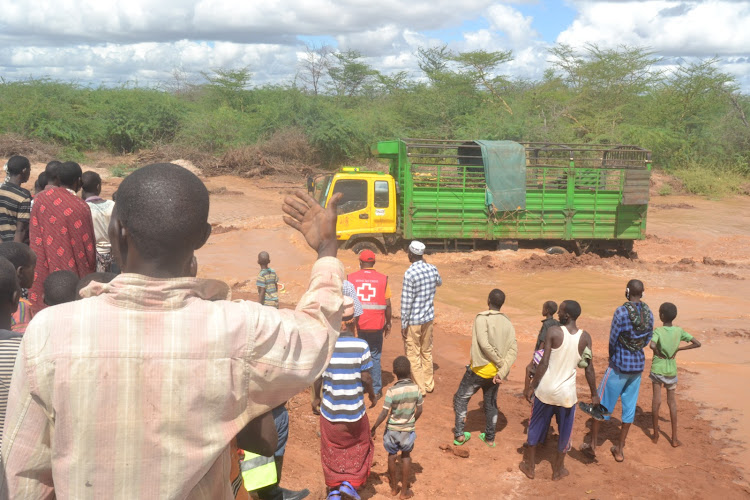 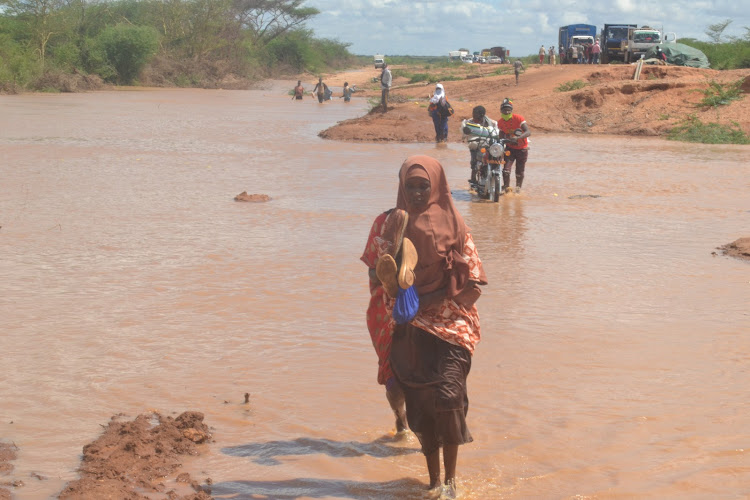 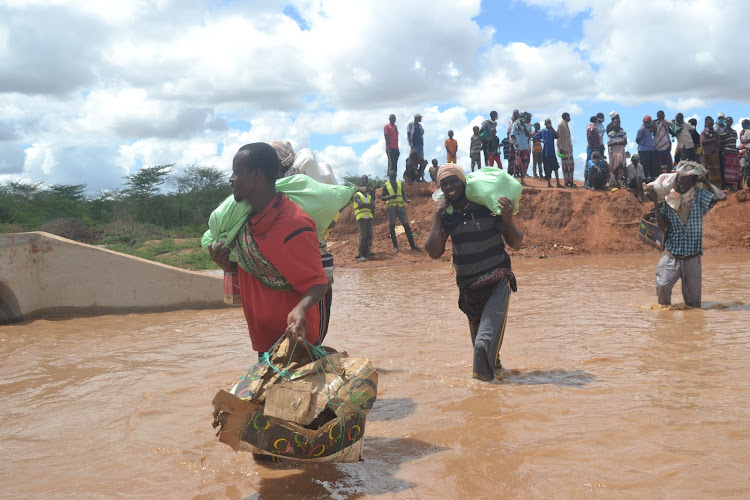 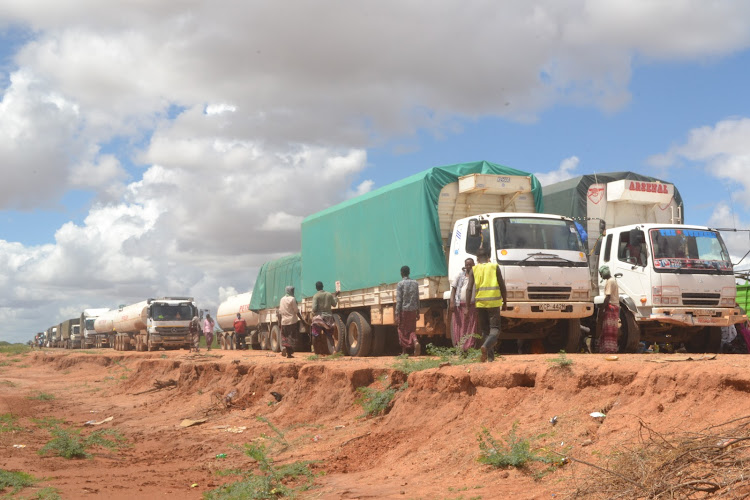 Hundreds of people have for the past three days been stranded at Dukanotu after a key road linking Tana River to Garissa was ruined by floods.

More than 30 heavy commercial vehicles laden with perishable and non-perishable goods destined for Mombasa and Garissa are stuck for kilometres either way.

And there is no respite as the water level increases each day, causing heavy losses to transporters and farmers.

Kenya Red Cross officials and journalists headed to flood-hit Sala, were also stuck at the crossing. Luckily, their two Land Cruisers were pulled out by a lorry ferrying mangoes.

Vehicular transport between Hola and Madogo has also been affected, forcing people to cross the flooded road on foot. Trucks with food, fruits, and other essential products are stuck either way.

The travellers are hurdled in tiny camps at the crossing. They do not have masks and to them, social distancing is out of the question. They say their problems are bigger than Covid-19.

Kenya Red Cross Coast manager Hassan Musa said his team had to return to Malindi as it was difficult to reach the over 500 households affected by floods.

"Today, we had planned to go and assess the flood situation at Sala and Mororo in Tana River. We were unlucky, for when we reached Dukanotu the road completely cut off for the third day," Musa said.

Musa said women are especially hard-hit as they are unable to cross the flooded road.

Fruits like mangoes and watermelons are going to waste. Musa fears that the situation will get worse as it is still raining, making it hard to move people and goods.

"There is a problem of social distancing to avoid Covid-19, but it is a challenge since vehicles have to be pushed," he said.

The regional manager said only a few of the stranded people would be given masks. Others have to survive without any protective gear.

He said Kenya Red Cross and the Tana River county government will continue making assessment of all the affected areas.

"As Kenya Red Cross, together with other stakeholders including the county government of Tana River, we shall make sure all those affected live a decent life in safe areas."

Musa said over 500 households have been affected by floods in Sala and Mororo.

He said they will provide non-food items to the victims but it is important to move to safer grounds instead of waiting for the floods to sweep them away.

He said three boats would be dispatched to Dukanotu and other areas to help people cross flooded regions.

There might also be a need for helicopters to be used to access the flooded areas, the manager said.

The floods are a blessing as people camped in close quarters will be easily reached to be sensitised on the importance of hygiene, keeping social distance and wearing face masks.

Truck driver Mushrif Mohamed said he has been stuck for the last six days.

He lamented that the flooding has remained unattended each year and questioned why the government did not ensure the road was improved to stop losses to businesspeople and truck owners.

"We were transporting fuel to Wajir but got stuck here five days ago," he said on Monday.

Ibrahim Ali urged the government to intervene and provide long-lasting road network in the area.

"We have been neglected here.  There are so many problems. People lose lives, property, and domestic animals are targets of hyenas when homes are flooded," the Tana River resident said.

Joseph Kimani, a truck driver from Kiambu, said they have been suffering since they left Bura on Monday last week. He has been on the road for 14 days.

"We have no food - only fruits like mangoes and watermelons. We also drink floodwater. We urgently appeal for assistance. The road should be repaired so that people can cross to the other side and continue with their businesses," Kimani said.

His load of mangoes has since gone bad, a big loss to the owner.

Dukanotu resident Maalim Dola ABdulahi has lost seven goats since there is no movement due to floods.