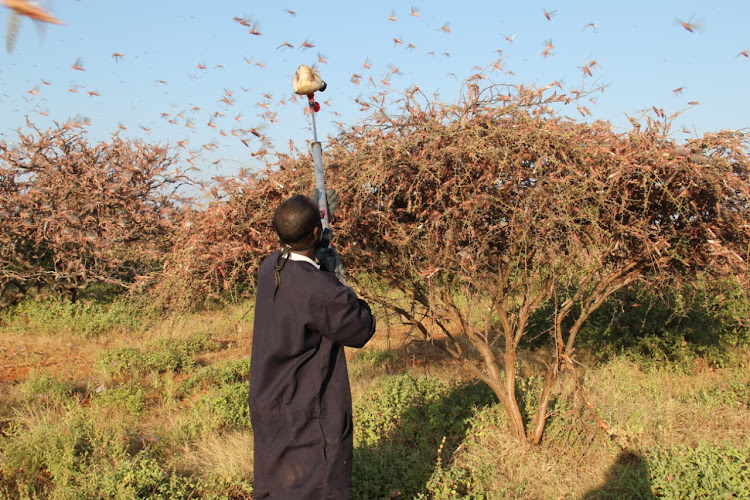 The government will carry on with aerial spraying of locusts in 27 counties so far infested by the destructive pests.

Administration Secretary for the Department of Crop Development Kello Harsama said eight aircraft and 500 National Youth Service officers have been deployed to tackle the locust menace.

He said 10 vehicles mounted with chemical spraying machines will be used by the officers in Marsabit, Isiolo, Meru, Samburu, Laikipia and Nakuru while four will be put on standby.

Harsama said the Agricultural and Food Organization (FAO) has donated 10 vehicles and chemicals which will be used in the northern region.

He said Wajir, Mandera and Garissa were already free from locust invasion but still have two months to be declared locust-free zones.

Harsama said the invasion has been brought under control in 10 counties.  He said swarms had destroyed crops and urged officers to move in and kill them when they were still unable to fly.

The first generation of locusts has died but a second generation is yet to mature.

He said six vehicles mounted with spraying machines will be in Marsabit, Isiolo, Samburu, Laikipia, Baringo and Nakuru while four would be on standby in Nairobi.

He urged county governments to recruit locals to fight the locusts instead of fully depending on the state.

He said the Agriculture Ministry was seeking permission from the national security committee to allow agricultural officers to work at night despite the ongoing curfew.