• They also want the County Action Plan be directly funded by the national government for all the northern counties so at to protect the nation against terrorism and radicalisation.

• On education, the residents recommended that infrastructure development for schools both primary and secondary as well as teacher management be devolved. 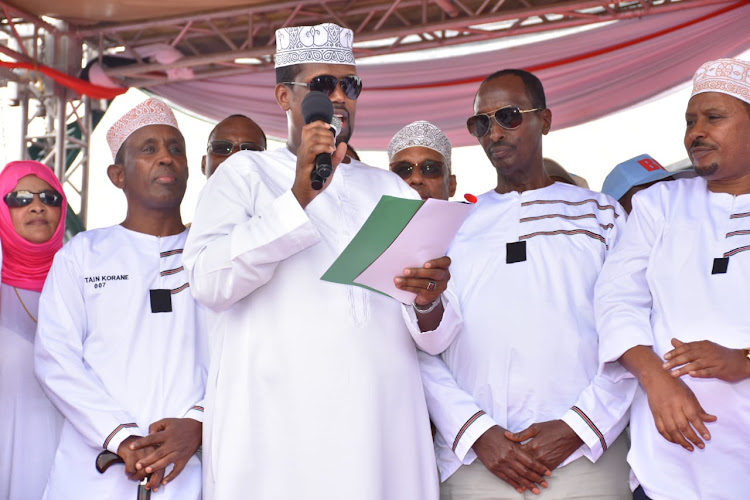 Issues to do with land, education and security featured prominently in recommendations read out by Mandera Governor Ali Roba during the sixth Building Bridges Initiative forum held in Garissa.

On security, the residents want the County Policing Authority be managed by counties and each county government to establish it is own County Police Service.

They also want the government to invest in counter-radicalization measures in the national government and enhance corporation between the two levels of government.

In their recommendations, they also want the County Action Plan be directly funded by the national government for all the northern counties so at to protect the nation against terrorism and radicalisation.

The region that has borne the brunt of al Shabaab attacks since 2011 has been grappling with how best to deal with the ragtag militia that has been changing tact for the past nine years.

On education, the residents recommended that infrastructure development for schools both primary and secondary as well as teacher management be devolved.

This follows the recent withdrawal of close to 3,000 non-local teachers by the Teachers Service Commission that the leadership from the region claimed was unilaterally done by their employer.

This, they said was done without considering the ripple effect it will have on the learners.

So emotive is the issue that leaders have gone a step further to suggest that during the next recruitment for the region, they will not allow any non-local teacher to be enlisted for interview accusing them of using the region to get employment only to abandon them midway.

On land, residents are recommending the government to register all community land and ensure that community land registration takes place before any large scale compulsory acquisition of land.

They are also recommending that any prospecting and exploitation of resources on, under and above the surface of any community or public land be carried out cooperation with county governments and communities that have customary ownership of the land.

The residents are recommending term limits for governors be removed and allow voters to decide them by popular vote. 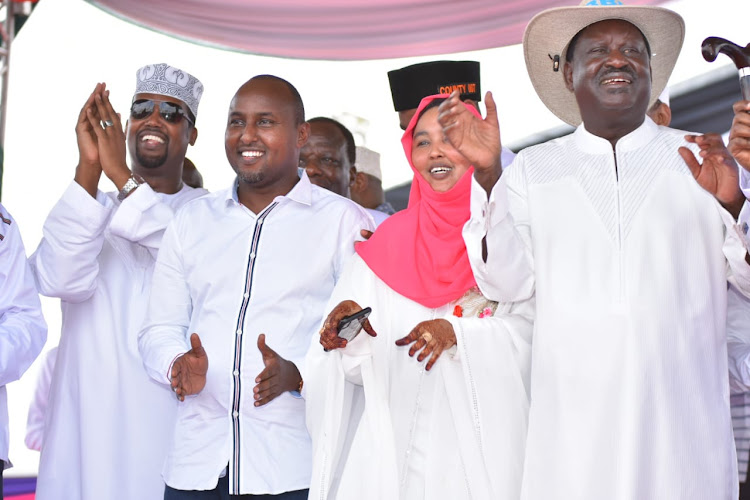 ODM leader Raila Odinga and other leaders during the sixth consultative forum of the Building Bridges Initiative in Garissa on Sunday, February 23, 2020.
Image: STEPHEN ASTARIKO

This according to political experts, is a fall back plan for governors who have been pushing for regional governments because they feel it might not go through because of the opposition it has already received.

They are also recommending that all counties be connected to the National Electricity Grid to provide a level playing field for growth and development.

In Northeastern, only Garissa is connected to the national grid.

They also recommended all existing electoral seats [47 counties, 290 constituencies and 1450 wards] remain as they are.

In last year's released census figures, some of the electoral seats did not meet the threshold and are at risk of being scrapped.

National Assembly Majority Leader Aden Duale at the weekend said they will not entertain any move to have the existing electoral seats scrapped because of their population.

On historical injustices the residents want the government to undertake the full implementation of the Truth Justice and Reconciliation Commission (TJRC) and Ndung’u Land Report.

Speaking at the rally, Wajir Governor Mohmed Abdi said that it was important that historical injustices be addressed conclusively noting that victims of the infamous Wagalla massacre in Wajir and Malkamari massacre in Mandera.

“Now that we have an opportunity through the BBI process to have these issues addressed, it must come out strongly on how best we can have a national conversation on historical injustices across the country to allow for healing and compensation for the victims. This is a matter that we cannot continue wishing it away. It is haunting the leadership of the region to date,” he said.

They also recommended that national government fast track and complete all ongoing infrastructural developments projects including the construction of the Isiolo- Mandera 740km Road,

They described the road as the single most important life-transforming investment that they noted can end the complaints of marginalisation and bring down the cost of living in the region and connect it to the rest of Kenya.

Livestock being the economic mainstay of the region, they recommended the national Government to establish a holding ground/livestock disease-free zone to act as export quality control centre at the Lamu Port.

The five-page document was later handed over to ODM party leader Raila Odinga who has been leading the popularisation campaign rallies.

Raila promised to the residents from Northeastern that their recommendations will be well captured in the final document with a view of ensuring that the region just like any other part of the country receive their fair share of resources and also come at par in terms of development.

BBI is all about inclusivity and bring Kenyans together with the end results having a united country where everyone irrespective of his position, ethnicity feels part and parcel of the Kenyan community.

The meeting was attended by the three governors, senator Yussuf Haji who is also the chair of the BBI taskforce and a host of MPs, MCAs and other opinion leaders.

A notable absentee at the event was National Assembly Assembly Majority Leader and Garissa Township MP Aden Duale who made good his threat of absconding the rally which he has numerous occasions termed as ‘confusing and divisive’.

We will not be left behind in BBI, say Northeastern leaders

• The leaders drawn from the three counties expressed  their hope that that BBI will give them an opportunity to have current predicaments such as ...
Counties
1 year ago

BBI is the path to inclusivity, jobs and wealth creation — Korane