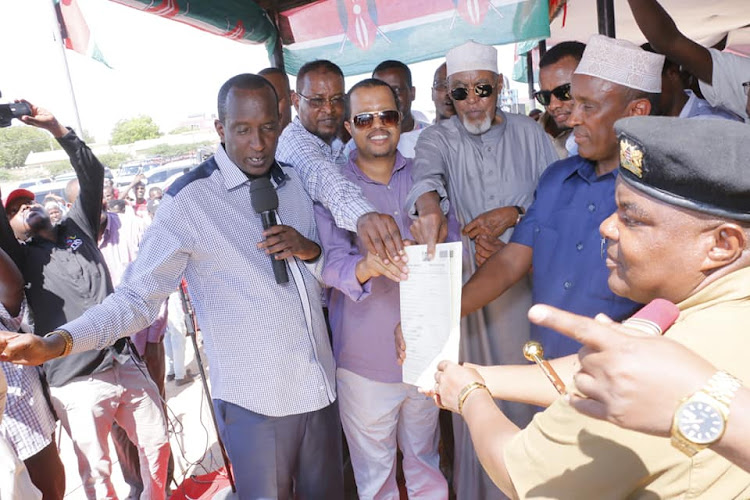 DEREGISTRATION: Interior CAS Patrick Ole Ntutu with leaders from Garissa and Wajir during the launch of the de-registration exercise at Garissa Primary School on Friday, November 8, 2019
Image: STEPHEN ASTARIKO

Thousands of Kenyans who wrongly registered as refugee will be deregistered after the government launched 30-day vetting exercise.

Interior CS Fred Matiang’i said the government was aware of the circumstances under which the citizens registered as refugees.

He noted that while it constituted an offence punishable under the law, the government had resolved to pardon the affected persons.

“Many were attracted by the good life in the camps which includes free food, medical care and schooling. The decision to pardon these people is informed by the fact that majority committed the offense while they were minors,” he said.

It is estimated that there are 40,000 double registered persons in Kenya.  Majority of these people claim to be Kenyans registered as refugees.

The government has also given a window period to refugees who illegally acquired Kenyan citizenship documents to surrender to the authorities.

Matiang'i said attempts to solve the double registered issue was hit by logistical challenges in 2016 when 15,000 people applied to be deregistered.

UNHCR representative Magatte Guisse said deregistering Kenyans from the refugee agency was very important as it showed Kenya was committed to finding solutions to the problem of refugees.

He said UNHCR will fully support the program and work with relevant government agencies including the county government.

Korane said the people affected have suffered as they have lost many opportunities including pursuing personal goals and travel.

“These people have lost independence. They cannot move around. We believe this move will help so many people. We also urge local chiefs and those involved to ensure only genuine Kenyans are deregistered,” he said.

Dadaab MP Mohamed Dahiye said the deregistration process was long overdue and its launch was the beginning of liberation of people from years of misery and desolation to attain their right status.

“We would like to appeal to Interior CS that if the 30 days are over and more people have not been reached, kindly extend the exercise to ensure no Kenyan is in the refugee database,” he said.