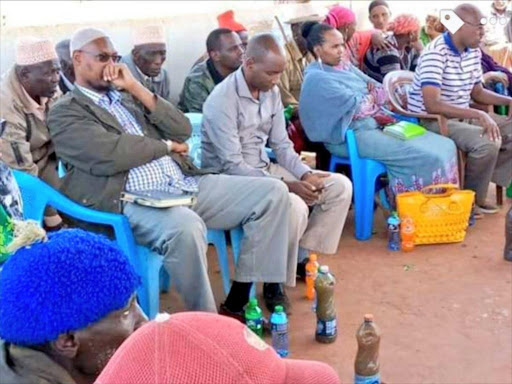 Some leaders who were offered dirty drinking water / COURTESY

Marsabit county leaders were served dirty water in plastic bottles at a meeting on Monday at Karare market.

The residents sent the clear message: we demand clean drinking water. They had boiled dirty born water and served it at the table. No one drank it.

The meeting was to discuss the Marsabit Municipal Charter.

Former Laisamis MP Joseph Lekuton said that they are not ready to have Karare included in the municipality, noting that they are ready to sue and get an order.

He said residents have “far-more pressing issues” that need urgent solution before the municipality.

“We clearly need clean water as can be seen. Clean water is vital to society. Why prioritise the municipality when our people are still suffering?” Lekuton asked.

He also said the law had not been followed when the positions of the municipality board members were advertised.

The people of Karare are opposed to the call for a municipality until all sensitive issues are taken care of, he said.

“Marsabit has not yet met all requirements to become a municipality. We will not allow our people to suffer and to be taken advantage of,” Lekuton said.

The leaders blamed Senator Godana Haragura and Laisamis MP Musa Arbele for supporting the charter without considering the pressing needs of residents. Karare South MCA Asunta was in attendance.

Last week, more than 20 MCAs met in Nairobi to discuss the the Municipality charter.

Moyale Township MCA Kiya Jillo said there were requests that Moyale, Karantina and Shegel be a part of the municipality.

However, when he spoke at Karare, county speaker Matthew Loltome said Karare has been removed from the list of municipality regions.

“People must see the map to be sure Karare has been removed from municipality regions,” Loltome said.

For the second time, the advertisement gpt board members’ positions was disregarded after Karare residents demanded the removal of the region from the map.