Tharaka Nithi county hospital to get facelift after Ruto’s promise 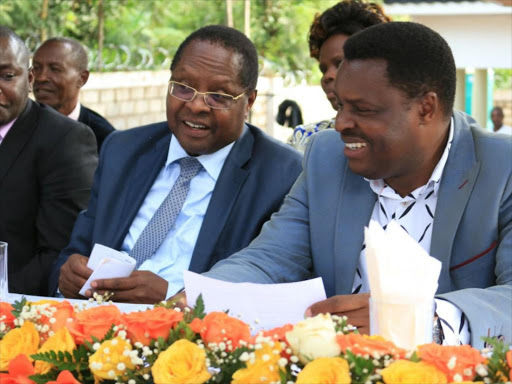 The county government of Tharaka Nithi has unveiled the package of benefits residents will receive after a recent visit by Deputy President William Ruto.

Ruto visited the county early this month during the thanksgiving service for governor Muthomi Njuki.

The county says the Chuka Referral Hospital, the biggest health facility in the county, will now be upgraded to Level 5.

During his visit, Ruto said in three weeks the hospital will get a CT Scan machine worth Sh150 million to improve services, in line with the President’s Big Four agenda.

The national government is also in the process of connecting more 12,000 households in the county to the national grid from the current 10,000.

“We have released Sh600 million to connect these households with power and we want to ensure a total of 28,000 households in Tharaka Nithi county will be connected. We will liaise with the governor and his government to know the people to be connected,” the Deputy President said.

In President Uhuru Kenyatta’s Big Four agenda’s housing pillar, the DP said 10,000 houses will be built in Tharaka Nithi, with the first phase starting with 2,000 units in the next financial year.

The two governments will agree on the location of the houses.

He later commissioned Murimi Dairy Cooling Plant at Rubate that will boost daily farming in the area and pledged 25 coolers in the county, where eight have already been put up five more will be set up by the month of February next year, creating jobs for the youth and women.

The national government will set up an Artificial Insemination centre worth Sh80 million in the region in partnership with the county government, which provide land and other logistics, according to Governor Muthomi Njuki. This will lead to insemination costs going down, enabling farmers to own superior breeds greatly improving productivity.

“We intend to boost farming in this region, mostly in coffee and tea production by ensuring we increase coffee production from the current 40,000 metric tonnes to 100,000 metric tonnes. This will be by giving out coffee seedlings and strategically reducing the price of fertiliser,” he added.

This will lead to farmers focussing on agribusiness, for which the President agreed with India and China governments to open their markets. The government of China has also opened its market for avocados and macadamia.

The DP urged residents to put more effort in farming of these for the ready market.

He also confirmed the completion of procurement for Chuka and Chogoria Water and Sewerage system, in which 1.6 million has been released for the projects, which are set to be commissioned in February next year.

Ruto said plans to build Kithino, Maara and Nithi dams are ready and the projects will start soon.

Post a comment
WATCH: The latest videos from the Star
by STAR REPORTER
North Eastern
08 December 2018 - 00:00
Read The E-Paper