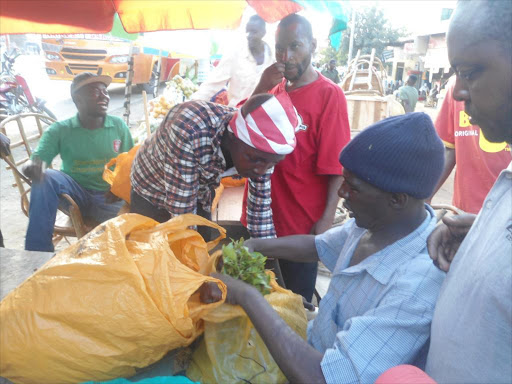 A Mughuka seller at Mwingi-Garissa stage attends to his customers before the ban of the plastic carrier bags.

The National Environmental Management Authority has been urged to step up the fight against plastic carrier bags in Marsabit county.

Kitiyo asked Nema to crack down on traders and members of the public using the bags, saying that those found guilty will be punished.

The commissioner, who was chairing the county service delivery committee, cautioned enforcement agents against compromising the law and asked Nema to enforce the one-year ban to the letter.

Environment officer Stephen Beilewa said they are investigating the exact source of the outlawed plastic bags, though it is suspected to be the border town of Moyale.

He said that plastic bags in reasingly have been turning up in in drainage tunnels, residential estates, and garbage collection points.

The official said some traders failed to declare their plastic bags stock for disposal as demanded by law when the ban came into force.

Meanwhile, departmental heads have been asked to familiarise themselves with the new county procurement procedures and regulations.

Kitiyo said guidelines for procuring goods and services in government should always be adhered to without exception.

The commissioner said following the procedures enhances transparency and accountability.

Nema officials in October intercepted 1.7 tonnes of banned plastic bags at Mwembe Tayari Market in Mombasa as they were being offloaded from a Tanzanian bus.