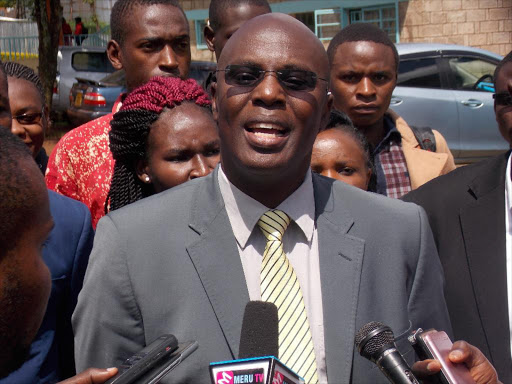 Swahili author and expert Prof Ken Walibora speaking to the Press at the University of Embu. /Reuben Githinji

Leaders have been blamed for the stagnation of Kiswahili growth by failing to use it and clinging to English despite being poor in it.
Kiswahili author Ken Walibora said most leaders struggle to communicate in English, while they can speak in Swahili, which is Kenya’s national and official language. He said most MPs, senators and MCAs prefer to contribute in their respective legislative houses in English.
He said some leaders embarrass themselves in public in their struggle to speak English.
Walibora said the attitude of failing to take pride in the national language and clinging to English has largely contributed to Swahili failing to grow.
He spoke at the University of Embu when he presented a public lecture on Kiswahili.
Walibora said many developed countries, including China, Japan and Germany, have prospered because of using their languages to communicate.

Post a comment
WATCH: The latest videos from the Star
by Reuben Githinji @githinjireuben
North Eastern
19 November 2018 - 00:00
Read The E-Paper