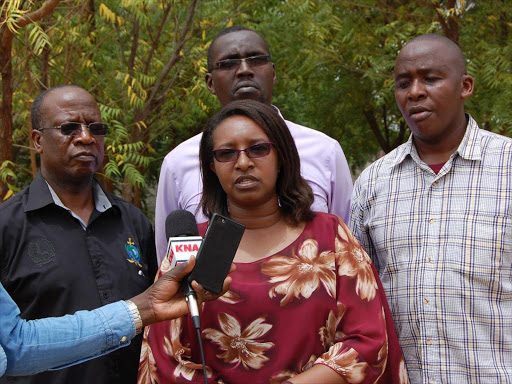 Everlyne Njeri, a counselor and senior superintendent of police from the IG’s offi ce /STEPHEN ASTARIKO

The office of the Inspector General of Police has partnered with schools to counter violent extremism.

The IG’s office has sponsored school music groups at the zonal level, as well as those who will proceed to the subcounty and county to the national stage.

The gala will be in Nyeri starting today until August 18.

He said the IG’s office chose to fight extremism through music, which “communicates the message fast”.

“We have to partner with society to reach out to outgoing and energetic youth,” Ndili said.

He said the agency wants to protect youth from al Shabaab recruitment and similar terrorist groups.

“We know radicalisation is happening and we are concerned that the recruiters may start eyeing youth in secondary schools, colleges and universities.”

Ndili said the partnership is meant to reach out to students and the society as a whole.

Everlyne Njeri, a counsellor and senior superintendent of police from the IG’s office, said it is necessary to involve students in the fight against terrorism through music at an early stage.

“Music festival is a venture that the police can use to reach out to youth targeted by criminals.”

Teacher Mohamed Yussuf from Garissa Primary welcomed the move by the IG’s office.

He urged the government to ensure the youths are engaged, saying joblessness pushes them to join terror groups.