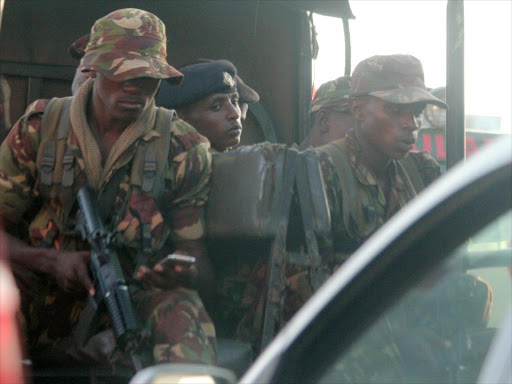 Two families from Machakos county who lost their relatives in the Kulbiyow attack on January 27 have urged the government to withdraw KDF soldiers from Somalia.

Slain soldier Moses Mukie, 52, was buried in Kyaani village, Mwala subcounty, on Saturday. He had served in the KDF since 1991.

His wife Veronica Mbula described him as an industrious and godly man who was dedicated to his family.

She said the government should consider withdrawing soldiers from Somalia.

On Saturday, Ntheketha’s mother Jane Mbithe told the Star she learnt of her son’s death through a relative working with the KDF.

“The last time my son spoke to his wife was on Friday morning, when he told her the war had intensified. After that, we could not reach him on the phone. We were later to learn he was among those killed in the attack,” she said. Mbithe urged the government to withdraw its troops from Somalia because many families have lost their relatives.

“As Kenyan parents, we are really suffering. To date, we hear there are some who have never traced the bodies of their sons killed in previous attacks,” she said.

Mbithe added, “I think it’s time the government guard our border instead of sending our children to Somalia.”

Ntheketha will be buried on Thursday at his rural home in Mukalwa village, Matungulu subcounty.

Speaking at Mukalwa Secondary School on Saturday during the opening of an administration block, Matungulu MP Stephen Mule said he will sponsor a motion in Parliament to push for the withdrawal of KDF soldiers from Somalia.

“The war in Somalia has brought unnecessary suffering to Kenyans and I will not sit back and watch as more Kenyans get killed,” he said.