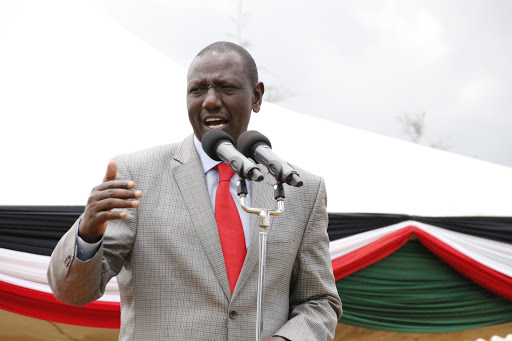 Residents of Kathwana, Tharaka Nithi county, on Wednesday protested against DP William Ruto’s remarks about the location of the county headquarters.

Hundreds of motorists were stranded for hours as the road connects Embu, Meru and Tharaka Nithi counties.

Last Friday in Kaare, Maara constituency, the DP said the Jubilee administration has pumped millions into uplifting the status of the county headquarters in Chuka.

But residents, who were chanting anti-Jubilee slogans and carried opposition placards, said the headquarters are in Kathwana, not Chuka.

They said 400 elders from the county met in 2012 and agreed the county offices be built in Kathwana.

Igambang’ombe MCA Albano Kiania said some leaders deceived Ruto that the county offices are in Chuka.

Mitheru MCA Nevert Kinuthia said projects for the county have been diverted to Chuka.

Kathwana market chairman Patrick Nyaga said they want President Uhuru Kenyatta and the DP to visit Tharaka and denounce the remarks Ruto made.

Another resident, who sought anonymity, said, “We will vote for Cord if Jubilee does not want the headquarters to be in Kathwana.”