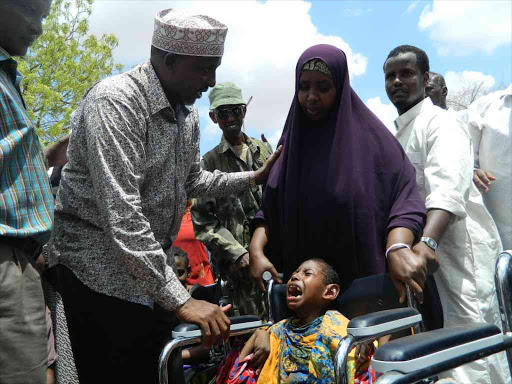 Garissa Township MP Aden Duale and a child living with disability, when he donated 47 wheelchairs on  ursday / STEPHEN ASTARIKO

He gave them a dressing down amid cheers from wananchi. Duale urged the director general of Registrar of Persons to transfer the officials and bring in people.

Duale was speaking at the Garissa library after donating wheelchairs to people living with disability. He said the registration officials have turned the office into a corruption den.

“It will no longer be business as usual with such rogue officers, whose sole mandate is to frustrate our people from getting this very important document. They are busy collecting money and whoever fails cooperate never gets assistance,” he said.

The Garissa Township MP said he will take it upon himself to ensure officers who have overstayed at the station are transferred.

The residents said despite having waiting cards, they are turned away until they pay bribes.

Duale singled out an official identified as Victor, who he said is the ring leader of the cartel collecting money from residents.

He said he will instruct authorities for chiefs and assistant chiefs to issue IDs when they are ready.

Duale commended the police, who a month ago bust a cartel that has been facilitating acquisition of birth certificates, IDs and passports to unqualified people.

Lack of IDs has been a big problem in Northeastern. Leaders have accused the government of doing little to address the problem.

During his tour of the region in June, President Uhuru Kenyatta directed Interior CS Joseph Nkaissery to meet the director of registration and ensure youths are issued with IDs.

Post a comment
WATCH: The latest videos from the Star
by STEPHEN ASTARIKO @stephenAstariko
North Eastern
05 November 2016 - 03:00
Read The E-Paper