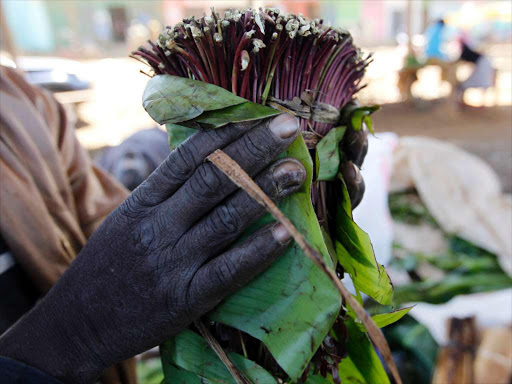 A khat farmer packs his crop at a collection point near his plantation in Maua, near Meru on August 20, 2014. Britain, whose large ethnic Somali community sustained a majority market for the leaves, banned khat as an illegal drug /REUTERS

The miraa ban by Somalia has created a new issue and fuelled a vicious political duel between Meru Senator Kiraitu Murungi and Governor Peter Munya.

Meru residents and politicians believe miraa farmers’ tribulations have been exploited by the two influential politicians.

Miraa traders continue to count losses as flights remained suspended. “I urge the government to intervene. The business feeds and educates our families and some cannot do without it,” Meru Miraa Traders chairman Ramadhani Abdi said.

Miraa farmer Mick Mutembei accused powerful Jubilee leaders of playing politics with the lives of growers and traders. “I am sure Uhuru will lose a lot of votes if the markets remain closed. It makes us suffer,” he said. “Some politicians are involved in this because they want to get votes.”

Last month, Munya, who is also chairman the Council of Governors, urged the Kenyan government to cooperate with the Somaliland government so it lowers taxes on miraa imports.

He said the region will be accorded “some sort of independence” if it opens up markets for miraa.

The Star has learnt Kiraitu recently met Somalia’s minister of Civil Aviation Ali Ahmed in Nairobi. Details of their conversation were not disclosed.

Ahmed on Monday announced the ban miraa flights to Mogadishu on Monday, but Somaliland and Puntland disowned it.

Kiraitu seeks to unseat Munya and has been wooing residents. He did not answer calls from the Star yesterday. Observers say the ban is a bonus for him, as it is blamed on Munya.

The Somali ambassador to Kenya said his country was angered by remarks made by Munya during his recent visit to Hargeisa, where he urged Kenya to recognise the breakaway region’s independence.

Yesterday, majority leader Aden Duale said the suspension will be lifted. “I spoke to President Hassan Sheikh Mohamud. Somalia is very angry with the governor’s call for Somaliland’s independence,” he said.

Equally, the move is shaping the two countries’ relations. Observers say the ban could strain bilateral ties. The two countries have longstanding maritime dispute, which is currently at the Hague-based International Court of Justice.

Somalia has also been displeased with Kenya’s decision to close the Dadaab refugee camp and repatriate refugees. Reports also say the ban was triggered by fear of an al Shabaab airport attack.