Komb Green Solutions, a CBO in Korogocho, is rehabilitating Nairobi River and reclaiming the riparian land around it 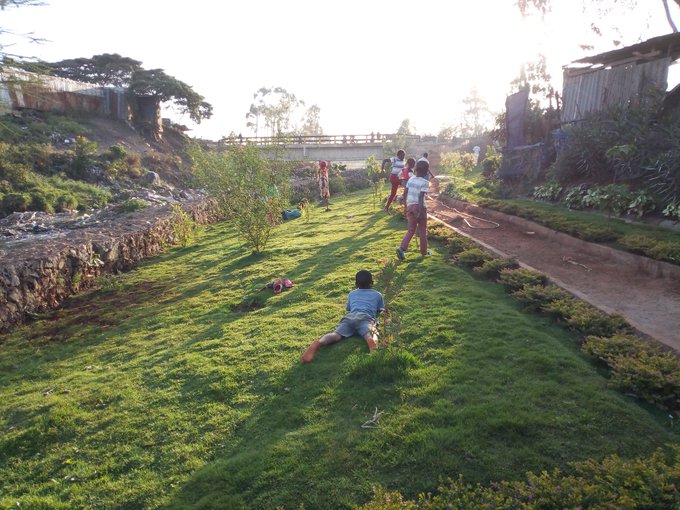 Poor solid waste management is emerging as a public health risk in Kenya, according to the 2020 report by Urban Africa Risk Knowledge.

The report says eight out of 10 plastic and other waste generated by households in urban slum areas in the country are being disposed of poorly in rivers and illegal dumpsites.

In Nairobi, Kenya’s capital, for instance, up to 2,500 tonnes of waste (50 per cent) generated daily remains uncollected which translates into widespread unsafe disposal in urban river systems.

The disposal of this waste in rivers and river banks has been linked to a wide range of risks, including slowing down economic growth, higher incidences of diseases, environmental degradation and deterioration of quality of life.

The waste in rivers has also resulted in pollution of the marine environment as rivers are the major pathways for the flow of plastic waste into oceans and lakes.

It is in this regard that Komb Green Solutions, a community-based organisation in Korogocho, is rehabilitating the Nairobi River and reclaiming the riparian land around it.

Korogocho is one of these informal settlements, with a population of about 34,000 people. It is divided into eight villages: Korogocho A, Korogocho B, Grogan A, Grogan B, Nyayo, Gitathuru, Kisumu Ndogo and Highridge.

Previously, the rehabilitated land used to serve as a dumpsite but now it has been turned into a green space -a vegetated land or water within an urban area that includes parks, children’s playing areas, grassed areas and green corridors like paths.

According to the European Commission’s Joint Research Center report on Enhancing the Resilience of Urban Infrastructure through Green Infrastructure, green spaces in urban areas have benefits such as improving air quality, reducing noise and enhancing biodiversity.

“The dumpsite acted as a den for thieves and was a place where drug peddlers and users would hide to do their illegal activities,” Komb Green Solutions secretary Calvin Okoth said.

“We saw a huge need to create a green and safe space for children to play. Providing a safe space for women to just rest was the other motivating factor since they were incidences of raping and mugging in the area.”

In 2017, under a slum upgrading programme, a new bridge linking Dandora and Korogocho was constructed as a way of improving mobility. The construction of the bridge employed several young people from Korogocho as casual labourers and security officers.

After completing the bridge, the youths involved in the construction feared they might return to crime. Thus,  they came together and decided to get rid of the dumpsite next to the bridge and along the Nairobi River to create a safe green space for the community.

They engaged the community and the leaders, including the commanding police officer in the area‘s station and the area chief. After consultations, the youths were allowed to clean the river and the riparian land along it and start a recreational park.

Kennedy Mwangi, a founding member of Komb Green Solutions, said that the restoration of the river banks entailed removing solid and human waste that had piled up for nearly 20 years.

“It took one year to remove all the waste and construct a gabion,” he said.

The clearing of the dumping site took place from June 2017 to February 2018. The founding members mobilised their fellow youths who were formerly involved in crime to help them with the task. Through their network with people working at the Dandora dumpsite, a lorry would come and pick up the waste once it had piled.

With help from the ward administrator, the CBO got a tractor which aided them to clear the waste and load it on the lorry. After the clean-up process, the youths constructed gabions along the river to prevent soil erosion. This was followed by landscaping the place which involved planting trees, grass and flowers.

The waste collected from the river and the illegal dumping sites are dumped at the Dandora dumping site. The plastics are sorted and collected by their partner organisation, Chemolex, which makes cabros from them.

The CBO’s 35 members are divided into several departments, including the tree nursery department, park maintenance and river cleaning. A duty roster is drafted where the members are allocated tasks on a daily basis.

With an estimated cost of Sh3 million for beautification, the park was officially opened to the public on November 19, 2018, and named Korogocho’s People Park.

According to Okoth, Komb Green Solutions applies for grants which facilitate their rehabilitation activities. They write proposals to donors detailing their intended activities. Some have been successful, including Sh300,000 from Population Matters and Sh150,000 from Muungano wa Wanavijiji organisations.

TRANSFORMATION: A section of the park in Korogocho.
Image: KOMB GREEN SOLUTIONS

Also, he said that the organisation has income-generating activities such as urban farming where they grow vegetables for sale and pig farming. They have also set up kiosks (makeshift shops) where they sell general goods and a car wash, which are operated by the members.

The reclaimed riparian land has a playing ground furnished with trampolines, swings and slides where children from the neighbouring areas come to play. The organisation also gives the children porridge on Saturdays as part of their feeding programme.

“We are at peace when our children go to play there because we know it’s safe,” Korogocho resident Cynthia Wambui said. “Before the youths rehabilitated the place, our children were at risk because they would play at the dumpsites which were hazardous.”

According to Moses Njuguna, a resident of Korogocho, the youth’s activities have changed the perception that people had about Korogocho being a criminal hub. “Incidences of raping and mugging have reduced since the youths cleared this dumping site,” he said.

Musera, a reformed youth and volunteer  at Komb Green Solutions, said that the organisation has transformed him and he’s able to do something useful with his life as he impacts the community.

“I am happy with what we have achieved so far. This place was stinking with all types of waste but as you can see now it looks great and the air is clean,” he said.

Musera further said that any youth who is interested in their work and wants to join them can reach out to them. “We have mentorship programmes here and if one really wants to reform we’ll gladly accept him.”

Okoth said that the significant challenges they are facing are inadequate funds to facilitate the group’s activities and a lack of protective equipment when carrying out the restoration activities.

He urged the newly formed Nairobi Rivers Commission to involve them in the rehabilitation of the Nairobi River since they have been doing it.

This article was originally published on Science Africa and InfoNile

The commission is part of President Ruto's grand plan to clean up Nairobi city.
Counties
1 month ago

How teacher Mwangi has transformed slum schools in Nairobi

The state employed a multi-sectoral approach to clean Nairobi river and secure parks
News
1 year ago
Post a comment
WATCH: The latest videos from the Star
by Tsim Mavisi
Nairobi
25 January 2023 - 21:00
Read The E-Paper