Letter says they have suspended construction work after inspection

• Last week, residents of Parklands and a firm protested the construction of a commercial property in the neighbourhood.

• They wrote to City Hall rejecting the proposed change of user from single residential dwelling units to commercial shops and apartments. 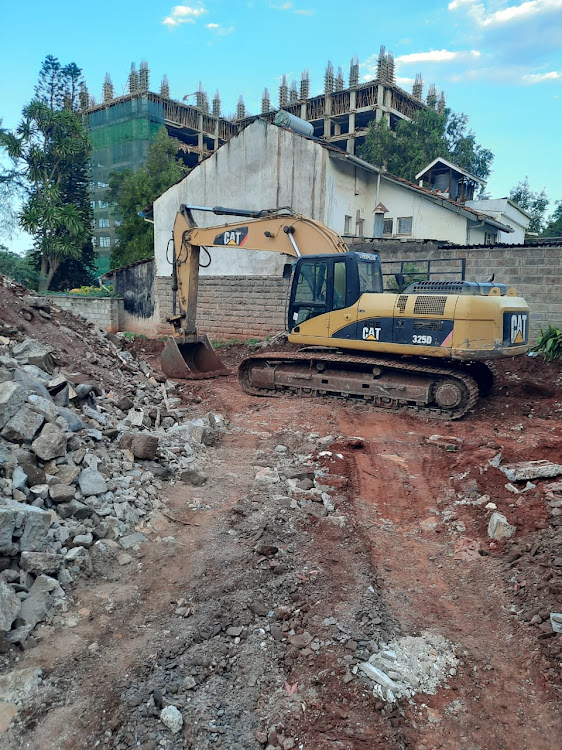 An excavator at the site in Parklands where NCA has stopped construction works
Image: CAROLYNE KUBWA

The government has suspended construction of a building in Nairobi's Parklands, citing non-compliance with regulations.

A letter dated January 16 signed by Silas Ogengo for executive director registrar of contractors said they suspended construction work after inspection. It was addressed to the developer contractor, the National Construction Authority.

"The work has been found to be non-compliant and is hereby suspended with immediate effect," the letter reads.

A contractor requires a compliance certificate from the authority, NCA registered contractor with valid licence, NCA accredited skilled workers, site supervisors, site board showing all approvals and the professionals engaged, personal protective equipment, among other requirements.

Last week, residents of Parklands and a firm protested the construction of a commercial property in the neighbourhood.

They wrote to City Hall rejecting the proposed change of user from single residential dwelling units to commercial shops and apartments.

Through lawyer David Ndambiri, residents claimed the owner had not obtained the required documents from the county government and that ongoing construction should be stopped.

The complaint is addressed to the executive county member for Urban Development and Planning. The letter states that the owner started undertaking development on the site in November 2022 by demolishing the existing single dwelling residential house and cutting down trees (including indigenous ones) and removing the resultant materials from the site.

“At the time of demolition, no development permission had been obtained from the CECM Built Environment and Urban Planning of the Nairobi County Government as statutorily required under the Physical and Land Planning Act 2019,” the letter to the CEC says.

The letter further says development activities are still ongoing with owners/developers excavating the land and in doing so, demolishing or bringing down walls next to or adjacent to the construction site.

The lawyer said occupiers and residents of the affected properties are now in real fear that if construction work is allowed to continue, the structure, safety and security of their lives, houses and other properties will suffer and will be greatly compromised.

“Being longtime residents and occupiers of properties next to the Subject Property, our clients are aware that the notice is intended for L.R. No. 209/5665/2 and not 209/5655/2 and that the property is not situated along 6th Parklands Avenue."

The say clients also believe the said notice was placed inside the subject property long after November 26, 2022, and they and other members of the public will not be aware and will not be able to raise their respective objections to the proposed change of user.

Lawyer Ndambiri told the CEC that residents and occupiers strongly object to any change of user of the subject property on grounds that construction and development commenced long before any development permission or authority had been issued by CECM.

They say the subject property is located in an area where there is no existing Nairobi City Water and Sewer Company sewer line and residents of the demolished house were relying on a septic tank.

They are apprehensive that there is no likelihood or possibility that the septic tank will handle the toilet and bathroom effluents coming from the increased number of users from the commercial building or apartments.

Post a comment
WATCH: The latest videos from the Star
by CAROLYNE KUBWA
Nairobi
18 January 2023 - 22:00
Read The E-Paper