Will receive seed funding of up to Sh 1.954 million as well as mentoring and resources to take their idea to next level 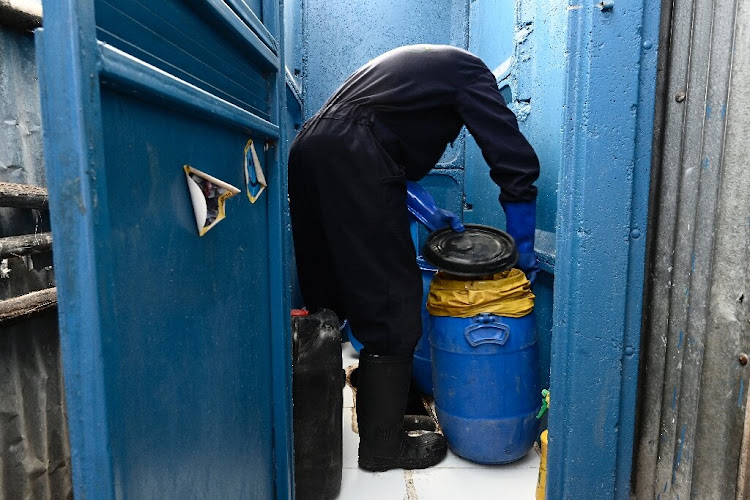 A fresh bucket being fitted in a toilet
Image: FILE

Five youth entrepreneurs from Kisumu have emerged winners of the Global ImaGen Ventures at the youth pavilion at COP27 in Cairo, Egypt.

Their company, Saniwise technology, was among 12 groups globally recognised for promoting health in informal settlements.

The 12 winners from over 40 countries presented innovations around biodegradable plastic and green sanitation technologies to solar-powered lighting systems for schools and bio-briquettes.

This invention is aimed at developing proper sanitation facilities and educating the society on sanitation practices.

The 12 are expected to receive seed funding of up to Sh 1.954 million as well as mentoring and resources that they will need to take their ideas to the next level and make an evn bigger impact in their communities.

Last week, Saniwise also won an award for the most innovative toilet of the year.

After their first virtual pitch, they managed to be among the top best 30 innovations in the world.

Odhiambo said the same pitch went global after they received a lot of mentoring sessions and financial support to better their presentation.

The team said that the award made them feel encouraged.

“They are not all about bringing their own solutions but they instead elevate those provided by the community.”

Saniwise is combination of two words, ‘sani’ to mean sanitation and ‘wise’ to mean showing knowledge

It is a registered social enterprise located in Kisumu county whose objective is to research on simple, affordable and effective sanitation management practices.

Having being brought up in Nyalenda and Manyatta slums in Kisumu, the five youths realised that proper sanitation was a challenge within their community.

“We were brought up together in these low income areas. We have seen the challenges of pit latrines experienced by locals,” Odhiambo said.

Here, they educate them on human waste management practices and how to exercise proper sanitaion.

Odhiambo said organising capacity building sessions is very difficult as they are a small startup.

“During these different forums we have the chance to capacity-build them on matters sanitation.”

The team has been operating since late last year when they worked in the pit latrine emptying business.

In May, after being registered the team then decided to think outside the box of just emptying pits.

“Normally, it costs more than Sh4000 per trip to empty a pit. That’s the least amount that can be paid,” he said.

“In a day, while using manual emptiers, it can take up to three trips to completely empty a pit.”

Odhiambo said that this has resulted in pollution as waste is mismanaged.

Due to the high costs of emptying waste, the locals have resorted to illegal ways to do away with the waste.

“There are those who empty the waste in the rivers which flow to the lake,” he said.

“Water from these sources becomes unsafe to use. Life underwater is destroyed.”

He also said constructing pits is expensive to the locals.

He added that this has led to some of the locals using undignified and dangerous structures disguised as toilets.

This has also led to others without toilets engaging in open defecation.

“This still possess as a challenge to our environment as people practice poor sanitation,” Odhiambo said.

As part of their waste management efforts, the team identified plastics pollution along river banks and Lake Victoria.

They noticed that the rate and manner at which plastics are disposed is very dangerous.

Odhiambo said that the lakes and rivers serve as sources of water and food for many but are poorly maintained.

Having seen and experienced these challenges, the team developed Saniwise toilet.

“We came up with an idea that is affordable, cheap and one that can turn waste to a valuable by-product,” Odhiambo said.

Their first model is construction of the normal pit latrine.

Odhiambo said that they normally do a lined pit for those who wish to use this type of model.

“The super structure is made up of all plastic,” he said.

They collect plastics, compress them into panels which they use to construct the toilets.

“We manufacture all these structures for our business model ourselves,” he said.

“It normally takes a maximum of two days to do a whole structure but one day is usually enough.”

The second model is referred to as a biodigester.

Here, the toilet has a biodigester and it utilises the blended water hyacinth that are rich in nitrates and phosphates.

These nutrients, according to Odhiambo, break down the waste.

With this idea, a customer is given the toilet structure as per the business model agreed upon, coupled with the blended hyacinth.

Once the structure has been established, the owner puts in the blended hyacinth.

They then proceed to use the toilet and after every week, they add the blended hyacinth.

This adds value to the waste.

The waste passes through to the first chamber.

Once it overflows, it pours into the second chamber where it becomes digested waste that is fit for human use.

During the process, as the waste decomposes, a thermophylic reaction takes place.

This anaerobic process produces heat that kills the bacteria consumed in the waste.

Odhiambo said that the two chambers are important as they ensure maximisation of the waste retention time.

“The whole idea is to have old waste pushed out by new waste. There needs to be circulation,” Odhiambo said.

Once the waste makes it past the second chamber, it is then deposited into the collection (trapping) chamber.

Here, the waste comes out as wet manure that can be dried and stored or used immediately.

“One is free to choose to use their waste or we alternatively collect it from them if they don’t need to use it,” Odhiambo said.

“We process the waste further and sell to a farmer.”

The first is the urine dryer where the urine is dried to make it usable.

“We normally remove the water and leave the nutrients,” he said.

The other section is where the waste goes through.

Odhiambo said that this minimizes the smell coming out the toilet as the urine and faecal matter go separate ways.

The blended hyacinth used in the toilet is usually given for free by Saniwise but the team also trains the locals on how to collect and blend them.

This way, Odhiambo said, they have been able to tackle the problem of pollution and create employment.

“We have also been able to mitigate the plastic menace that is affecting our rivers and lake Victoria,” he said.

“In this way, we have achieved food security as a lot of families and traders are dependant on the fish that comes from the lake.”

He added that they are slowly achieving the goal of managing human waste.

The third toilet structure is referred to as black soldier fly model.

This is where a basin containing the insects is placed beneath the toilet.

The user is given the eggs which they put in the basin trap.

“The eggs hatch within three days, after 14-18 days they are maggots. Here, they can be used as chicken feed. After one week they are big,” Odhiambo explained.

He said that these bugs help to break down the waste as they eat and reduce it significantly.

“Whatever remains is manure,” he added.

They, however, offer locals another option if they cannot afford the toilets.

“We normally give them and they pay an upfront fee of Sh4,000 and thereafter they pay Sh550 per month,” Odhiambo said.

He also said that sometimes the locals lack the money to pay.

They then resort to using plastics to make payments.

“We normally urge people to collect plastics within their environment and bring to us. We measure the volume and know how much they have brought,” Odhiambo said.

As Saniwise collects waste, the residents get something in return.

One good example is if a household has a toddler, once the waste is collected, the team gives the parents diapers.

Once used, they are encouraged not to throw them away and give them back to the team.

Baby diapers can take up to 50 years to be destroyed when carelessly disposed, Odhiambo said.

Locals receive training on how to fold the diapers so that upon collection, it makes it easier for the team to make a hole in the diaper, put seeds in it and grow trees using them.

“A baby’s faecal matter is harmless because it is basically breast milk,” he said.

“With trees, once the roots develop, it causes wear and tear in the diapers and they decompose from within the soil.”

So far, Saniwise consider this to be a success.

Prior to using plastics to make structures, they made iron sheet toilets that were easily destroyed by hydrogen sulphide.

Saniwise considers poor sanitation a big problem in the country.