This year's theme is about ensuring justice is served for those affected. 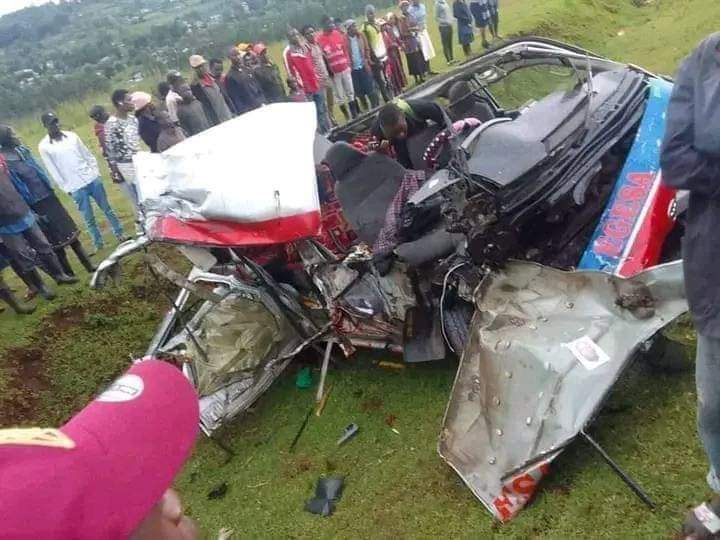 Matatu that was involved in an accident along Kisii-Sotik road on Wednesday, October 5, 2022
Image: FILE

Bright Aywaya’s life was shattered following a road crash that confined her to a wheelchair for life 25 years ago.

The crash injured her spine and raptured her intestines.

Aywaya said when the crash occurred, she was well-belted and seated at the back of the car.

“Our driver was observing speed, well licensed and the vehicle was in good condition,” she said.

Another driver who was in a hurry, however, caused the accident.

“A driver who was in a hurry to overtake a truck came to the wrong side speeding and the rest is history. I did not know what happened,” she narrated.

Aywaya gave her testimony on Sunday during the World Day of Remembrance of Road Crash Victims at Milimani law courts, Nairobi.

The day was set aside by the UN to remember road crash victims.

The day's theme was about ensuring that justice is served for those affected.

Aywaya, who is now confined to a wheelchair, woke up in hospital hours after the crash.

She was later told they were at Voi headed to Malindi in a private vehicle when the crash occurred.

“Of course, I had injured my spine and raptured my intestines,” she said.

Voi hospital had few facilities yet her condition was serious.

“It took me like 11 hours to get to Mombasa hospital where I got proper attention,” Aywaya said.

They had failed to get an aircraft in Tsavo because it was raining.

Back at Voi hospital, they called for an ambulance and realised that the closest one was from Mombasa hospital.

“By the time they arrived, my stomach was swollen because I had internal bleeding,” she said.

Her spine was dislocated.

“It was a long road of recovery,” she said.

Aywaya was a banker then.

She stayed at home for a year to recover but later went back to her job for a short time.

At work, she realised that many people were going through a similar experience.

She decided to offer volunteer work at the Spinal Injury Hospital but she did not have the skills.

Aywaya enrolled for a course. She has been working around advocacy since then to date and was been instrumental in ensuring the UN day for crash victims is put on the government calendar.

Donald Kosgei was involved in a crash while in Form Four.

The accident occurred in Eldoret while they were heading to Kitale.

“There was a head-on collision with a lorry. My uncle died on the spot,” he said.

NTSA chairperson Odhiambo acknowledged the magnitude of the challenge, saying road safety is a shared responsibility that all must play their part in.

Odhiambo said the fatalities in November 17 last year were 3,947.

Odhiambo said the figures will unfortunately keep rising each day.

"As NTSA, we do acknowledge the need to do more in addressing fatalities on our roads," she said.

Odhiambo decried the slow wheels of justice, urging those involved to hasten.

She said various legal instruments are set to be reviewed to address the emerging issues.

Justice Mwongo, on behalf of CJ Martha Koome, said the Judiciary is working to ensure no court case should take more than three years.

He said the Judiciary commiserates with the victims who sustained injuries.

“We see your pain, we see the pain of losing your loved ones and sustaining injuries that certainly altered the course of your lives,” he said.

Mwongo thanked those supporting victims as they try to navigate the dramatic aftermath of road crashes as they carry their pains and burdens, describing them as heroes.

He said the crashes have turned previously independent persons to rely on others for support.

Mwongo said the justice system should be responsive to the plight of the suffering victims.

“One of the frustrating aspects of our justice system is the long duration taken to decide and determine the cases,” he said.

Mwongo said the long trials with frequent travels for the victims worsen the trauma from accidents.

“We are working with all actors to realise a performance target to ensure no court case takes more than three years in trial and one year on appeal,” he said.

He challenged to Insurance Regulatory Authority to up the game.

Mwongo said such awards must be settled once the final judgment has been delivered.

“Due to the persistence of this problem, regulatory intervention is necessary to ensure the enforcement of compliance with contractual terms of insurance contracts,” he said.

NTSA says most fatal road traffic crashes occur from Friday to Sunday, between5pm to 10pm. The peak is 8pm.

This is largely attributed to reduced enforcement during these times, high volumes of traffic and pedestrians/rush hour, pedestrians crossing at non-designated or unsafe areas and easily getting knocked by speeding vehicles, poor lighting at the pedestrian crossing points and major highways and river fatigue.

Commandant Omari said most of the victims were pedestrians, motorcyclists, and pillion passengers.

Post a comment
WATCH: The latest videos from the Star
by GILBERT KOECH News Reporter
Nairobi
21 November 2022 - 22:00
Read The E-Paper