Ward reps said shisha was still being sold in many night clubs, despite a ban. 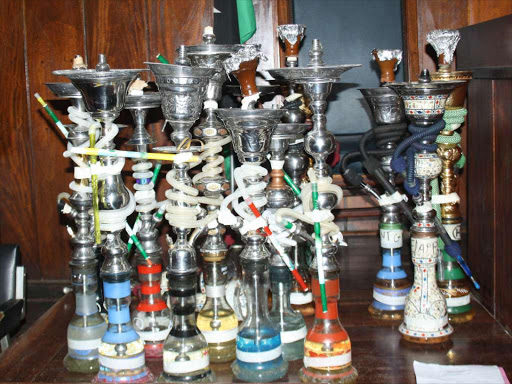 Shisha bongs presented in court during sentencing of smokers on February 7, 2018./JOSEPH NDUNDA

Led by the county assembly Health Committee, the MCAs said shisha was still being sold in many night clubs, despite a ban.

“We can't just sit down and wait for our youth to waste away with this shisha substance, we will ensure this ends immediately," Mountain View MCA Maurice Ochieng said.

Westlands, Kileleshwa, Lavington, Kilimani, South C and Lang'ata are some of the areas listed by MCAs to be selling the product.

Shisha is a glass-bottomed water pipe in which fruit-flavoured tobacco is covered with foil and roasted with charcoal.

The tobacco smoke passes through a water chamber and is inhaled.

Ochieng who is also the health committee chairperson said shisha had negative side effects.

“We are urging Sakaja to close down these Shisha joints," he said.

In December 2017, the then Health Minister Cleopa Mailu banned shisha smoking saying it had encouraged the peddling of hard drugs.

Kenya became the fourth country in East Africa to prohibit shisha, after Uganda, Tanzania and Rwanda.

But even after the ban, shisha is still widely sold in the country.

According to the World Health Organisation, the volume of smoke inhaled in an hour-long shisha session is estimated to be the equivalent of smoking between 100 and 200 cigarettes.

Last year, the head of the tobacco control unit in Nairobi Anthony Muthemba said enforcement of the ban had been met with a lot of resistance and interference.

When arrests are made during crackdowns, it takes just a few hours before the culprits are released.

People gather for shisha smoking sessions at lounges, cafes, bars and some prefer to do it at home in a cool environment, to enjoy it without any interference.

There is also e-Shisha, which is smoked below 45 degrees.

Shisha smoking has been linked to lung and oral cancers, heart disease and other serious illnesses.

It delivers about the same amount of nicotine as cigarette smoking does, possibly leading to tobacco dependence.

SIMON MWANGI: Which is safer, vape or cigarette?

Reality check; no matter how it’s delivered, nicotine is addictive and harmful.
Opinion
1 year ago

Health experts raise concerns over rise in e-cigarette use

Lack of regulations has led to a surge in trade, especially online
News
1 year ago
Post a comment
WATCH: The latest videos from the Star
by MAUREEN KINYANJUI News Reporter
Nairobi
21 November 2022 - 12:34
Read The E-Paper