The governor has given the officials 10 days to respond failure to which further disciplinary action will be taken. 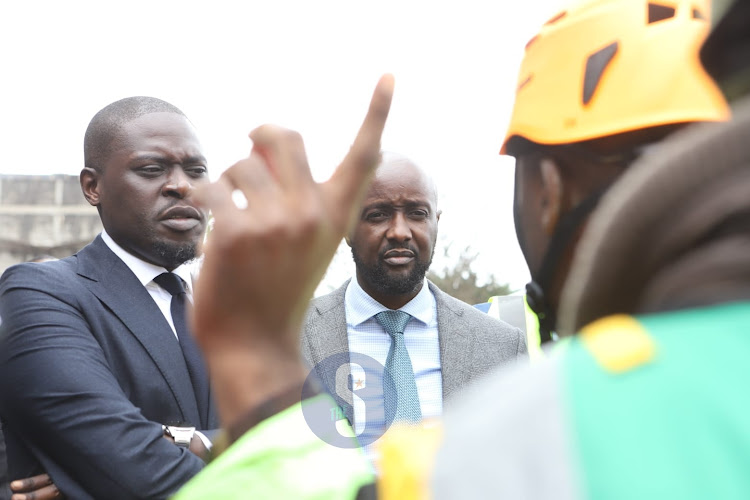 Nairobi Governor Johnson Sakaja and Kasarani MP Ronald Karauri briefed by officials after arriving at the scene of the collapsed building in Kasarani, Nairobi on November 16, 2022.
Image: ANDREW KASUKU

In a statement released on Friday, the three have been sent home pending investigations.

“Nairobi county has taken action against three officers who have been asked to show cause and interdicted due to negligence of their duties, including inadequate supervision, which led to the collapse of a building three days ago at Seasons, Kasarani,” the statement reads.

Sakaja has given the officials 10 days to respond failure to which further disciplinary action will be taken.

The county has also forwarded the names to the Directorate of Criminal Investigations for further investigations.

Sakaja had called for the arrest of the developer of the ill-fated Kasarani building, which collapsed on Tuesday.

He said his office is in liaison with the DCI and police to search and immediately arrest the developer.

The governor said the developer never got a permit from City Hall for the construction.

“The developer did not get a permit from the county. There was an enforcement notice but because of impunity, he decided to go on. He needs to be charged with murder,” Sakaja said.

Others are Jane Mutulili (Engineers Board of Kenya), Christine Ogut (The Institution of Engineers of Kenya) and Abdulmalik Gichuki of the Kenya Alliance of Residents Association.

The technical committee is under the county’s Lands, Housing and Urban Planning sector and was responsible for the consideration and approval of development applications.

One dead as 7-storey building collapses in Kasarani