Heavy burden for Sakaja as he inherits Sh99.06bn pending bills

This is an increase from from Sh54.32 billion in the 2020-21 financial year, meaning Nairobi incurred Sh40 billion in 12 months. 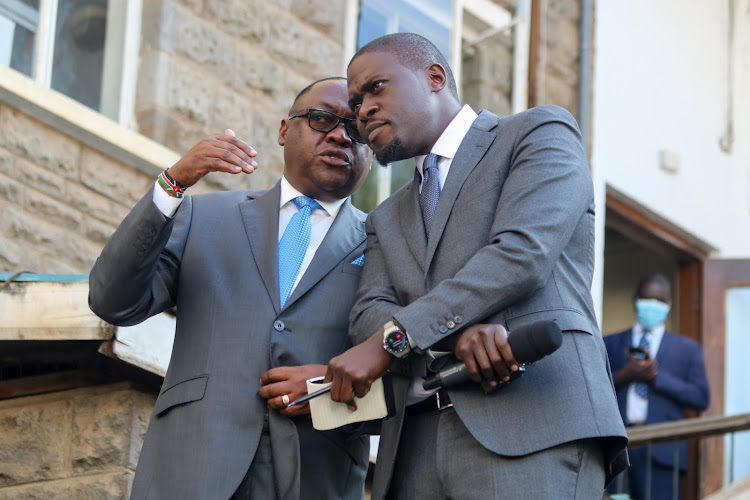 City Hall is choking in debt after revelations that Governor Johnson Sakaja has inherited Sh99.06 billion from the administration of his predecessor Ann Kananu and the Nairobi Metropolitan Service.

Latest data from the Controller of Budget shows that Nairobi’s pending bills jumped to Sh99.06 billion for the year ended June 2022, from Sh54.32 billion in the 2020-21 financial year.

This means that Nairobi incurred Sh40 billion in pending bills in 12 months.

In the report, CoB Margaret Nyakango says the county government failed to prepare a satisfactory payment plan for settling the pending bills in the current financial year

“During the period under review, the county treasury did not provide a report on the settlement of pending bills as of June 30, 2022,” she said.

The issue of pending bills has been a headache for Sakaja’s predecessors.

As a result, in  March 2018, former Governor Mike Sonko appointed former EACC boss Patrick Lumumba to head a 10-member task force to audit the county's pending bills and recommend to the county treasury which ones to pay.

All suppliers and contractors were asked to submit their bills to the committee.

The committee found that only Sh23 billion were legitimate.

Within his tenure, MCAs had put the executive on the spot over pending bills and accusations of paying lawyers at the expense of suppliers and contractors.

In November 2019, MCAs tasked Sonko to clarify the status of the county's pending bills.

They wanted the former county boss to state the exact amount of money City Hall owes contractors and suppliers.

During the period, Nairobi was among 15 counties flagged by Treasury Cabinet Secretary Ukur Yatani over unpaid arrears.

The county risked losing out on cash transfers from the national government over failure to pay pending bills.

In 2020, Sonko's administration was in the spotlight after the Ethics and Anti Corruption Commission said it has detected suspected fraudulent payments of pending bills.

Payment of legal fees had raised concerns, getting the attention of investigative bodies.

In March 2021, City Hall announced it aims to collect Sh829.6 billion from debtors to cover the ballooning Sh76.9 billion it owed.

Finance executive Allan Igambi had said the debt has been increasing because of limited revenue due to accrued interest and penalties, especially on statutory debts.

“The debt portfolio worsened over the years due to failure to achieve revenue projections and high-compounded interest and penalties charged by statutory creditors,” he said.

As a result, the county has trouble servicing the debt, resulting in an ever-increasing debt portfolio.

This has led the building to rely on generators for power.

Says within a week or two he will sign a deed of retransfer.
Counties
4 months ago

The principal amount owed to NSSF stood at Sh14.2 million during the period under review.
Counties
5 months ago
Post a comment
WATCH: The latest videos from the Star
by MAUREEN KINYANJUI News Reporter
Nairobi
26 September 2022 - 22:00
Read The E-Paper