By law, election of the speaker is supposed to take place immediately after MCAs are sworn in 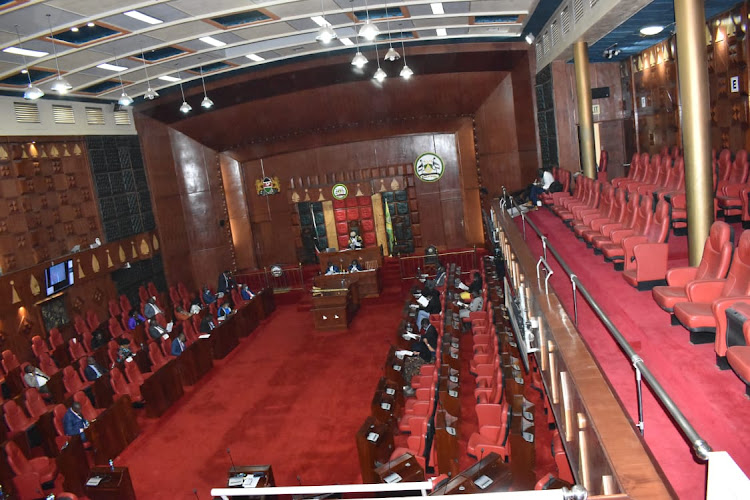 Following the gazettement of the swearing-in of Nairobi MCAs, the clerk of the county assembly has said Monday is the deadline for application for the speaker’s position.

Through a Gazette notice, clerk Edward Gichana  said that anyone interested in the position should pick up nomination papers from his office between September 23 and 26.

The applicants have been urged to ensure they fill and sign nomination forms and attach a copy of their CV.

The elections will be held on Thursday after MCAs  have been sworn in office.

There has been intense lobbying in the assembly in a bid to get the numbers that would help either team win the powerful speaker’s post.

The coalition has a slight majority in the assembly comprising 67 MCAs while Kenya Kwanza has 53 MCAs.

Three of the MCAs were elected on independent tickets.

By law, the election of the speaker is supposed to take place immediately after the MCAs are sworn in.

The standing orders also state that there would be only be two items in the order paper on the first sitting — the election of the speaker and swearing-in of members.

He secured 43 votes to beat his opponent Mutunga Mutungi who amassed a vote less in the contest, handing him the role of controlling the assembly.

The law requires a candidate to garner two-thirds majority to be declared the winner on the first round.

A simple majority will suffice in the second round pitting the first and second candidates who get the highest votes in the first election.

Elachi got 90 votes with her closest rival, Ali Abdi, garnering 27 votes, with George Wainaina getting four votes while Karen Nyamu got one vote.

Following her resignation in August 2020, former Makadara MP Benson Mutura was elected as Nairobi’s third speaker after receiving 99 out of 122 votes in the first round.

Six candidates from the seven earlier shortlisted battled it out for the chance to replace Elachi.

This was after former speaker Magelo withdrew from the race to support Mutura, a Jubilee candidate.

Only Situma and Majimbo proceeded to the second round of the vote.
Counties
4 months ago

With nominated MCAs gazetted, governors have 30 days to call for inaugural sittings.
News
4 months ago

The list has 37 women and two men, representing the youth and marginalised groups.
Counties
4 months ago
Post a comment
WATCH: The latest videos from the Star
by MAUREEN KINYANJUI News Reporter
Nairobi
25 September 2022 - 22:00
Read The E-Paper