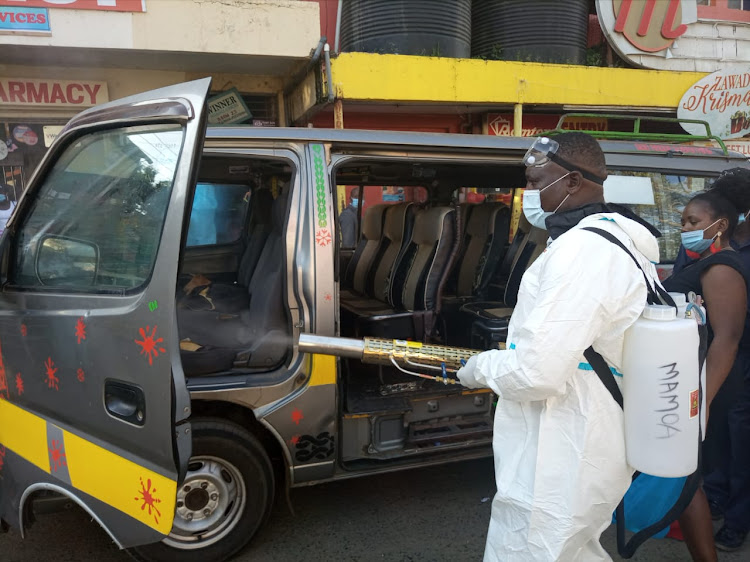 PREVENTION: A health official fumigates a matatu during the Covid-19 pandemic in December 17, 2020, at Machakos bus station
Image: PHILOMENA KILONZO

He has urged the city’s Public Health department to launch a fumigation programme.

Alai said public service vehicles operating in the areas should also be fumigated.

“Bedbugs are ravaging most parts of the low-income residential areas. Nobody wants to confront this stigma. Health officers should ensure PSV owners regularly fumigate their buses,” he said on social media platforms.

Abdallah Muteshi from Kibra said the insects were a problem in his home for a long time.

He said he had to sell his furniture and buy a new set.

Muteshi said the main source of the insects is the second-hand furniture on sale in estates’ byways. The furniture is sold at throw-away prices, he said.

“I had to sell my bed, mattress and living room furniture. The government needs to do something,” the 50-year-old father of four said.

Jane Karori from Kayole said no pesticide works against the bedbugs and its embarrassing having an infestation in one's home.

Oluga said the bedbug problem can be managed through a public fumigation programme.

He said the county mounted a successful fumigation drive during the Covid-19 crisis and it can be replicated.

Oluga said their offices had received complaints about a bedbug outbreak and the MCA's voice was a welcome amplification.

“A policy can be developed by the unit to engage PSV owners, landlords and the office space owners in the city to implement a fumigation programme,” he said.

The common bed bug has been a parasite of humans for thousands of years.
News
4 months ago